A recent article by Jonathan Jones on theguardian.com - Did art peak 30,000 years ago? How cave paintings became my lockdown obsession - considers aspects of prehistoric art such as portraiture, perspective, impressionism, movement and mythology on a personal virtual odyssey over the last year.

The cave art of Lascaux.

'I was recently awoken in the night by lions, their eyes glaring in the dark from blunt rectangular faces as they stalked bison through an ancient, arid grassland. As I came to, however, I realised I was not about to be eaten alive. This was simply one of the perils of spending too much time looking at images of cave art on the web.' 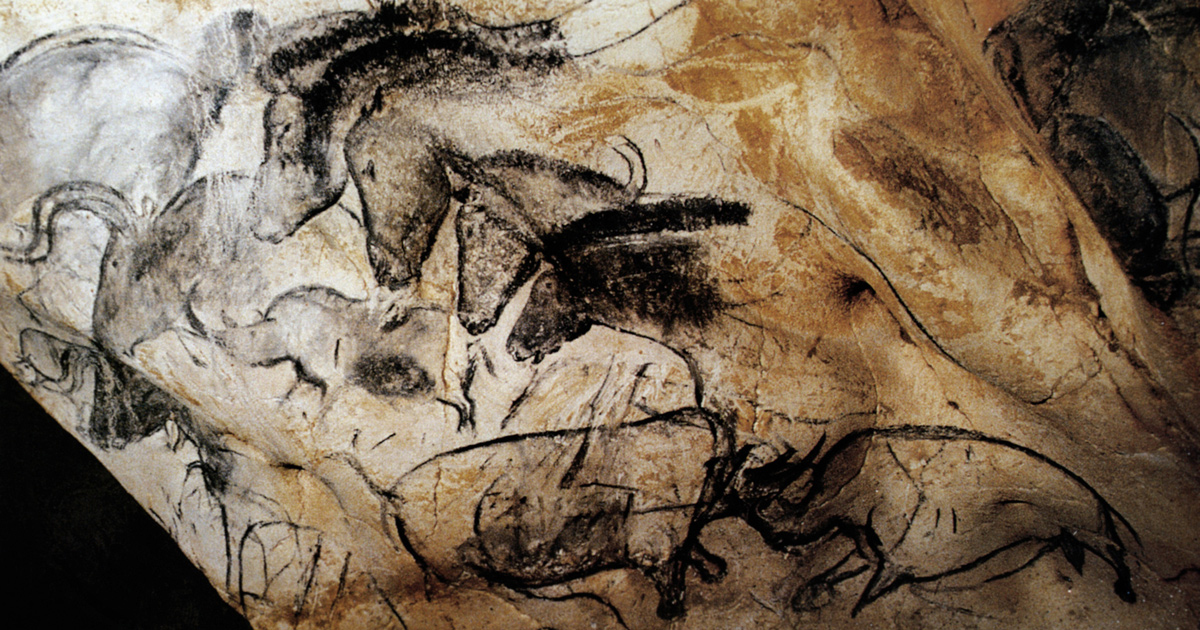 The cave art of Chauvet.

'Cave artists could do it all. The faces of the animals they painted are exquisite portraits, while their bodies are rendered in perfect perspective. But wait – weren’t these supposed to be the great achievements of European art? After all, in his classic study The Story of Art, EH Gombrich tells how western art took off when the ancient Greeks learned how to show movement, that the perspective was discovered in 15th-century Europe, and that the communication of sensation rather than the seen was the gift of the impressionists. Gombrich had probably not seen much cave art. Lascaux, a series of caves in the French Dordogne, was a recent discovery when he published his book in 1950 – and Chauvet, also in France, wouldn’t be found until 1994.'

'“Since Lascaux,” Picasso is supposed to have said after he saw the famous ice age cave paintings in 1940, “we have invented nothing.” Sadly, the quote is hard to source. But he should have said it, because it fits the insight that pervades his work, with its appetite for influences from ancient Iberian statuettes to African masks. Namely, that art’s story is not a trajectory of ascent, but more of a looping spiral, constantly retracing its steps.'

The cave art of Niaux.

'When the pandemic started, the Guardian switched its Masterclasses online and challenged me, one of its tutors, to come up with a theme. “OK,” I thought. “What about a virtual trip through the whole of art history?” But, like Picasso, I got stuck at the very beginning. And Picasso had a point: the more you look at images from the walls of Lascaux and Chauvet, the more you realise art really has invented nothing since those days at the end of the ice age.'

'It is hard to take in how comprehensively these ancient artists anticipated the future. It takes time to fully absorb this – say, a year in and occasionally out of lockdown. I’ve visited, in the flesh, some of the most spectacular caves: Cougnac, Pech Merle, Niaux. But, in the past 12 months, I have conducted an online odyssey into both the caves I’ve been to and those I’ll probably never see. (Chauvet and Lascaux are permanently closed while others can be reached only by experienced divers.) In that time, I have come to fully appreciate the stunning nature of this primordial creativity.'

'Cave art makes art history pretty much obsolete. That tale of upward ascent – of European masters gradually mastering reality, from the Parthenon frieze to the eyes of Rembrandt – is simply not true. It turns out that perspective, shading, movement and expressiveness are not, after all, hard-won western discoveries. Rather, they are part of the toolkit of the human mind.'

'How does ice age art reveal this? We – homo sapiens – evolved in Africa no more than 300,000 years ago. There is evidence of art, potentially even paintings, in South Africa up to 100,000 years ago. Then, 30,000 years ago, a stunningly accomplished artistic culture exploded on to the scene, at least according to what we have been able to find. This took place in the most recent of Earth’s ice ages, a time when Europe was anything but hospitable. Yet cave art shows why humans migrated there: to hunt mammoth, rhinoceros, hippopotamus and deer. The tradition of cave painting continued up to the end of that ice age, about 10,000 years ago.'

Click here to reach Jonathan Jones' conclusion on this matter, and to read the article in full