Early Rock Art of the American West: The Geometric Enigma

By Ekkehart Malotki and Ellen Dissanayake 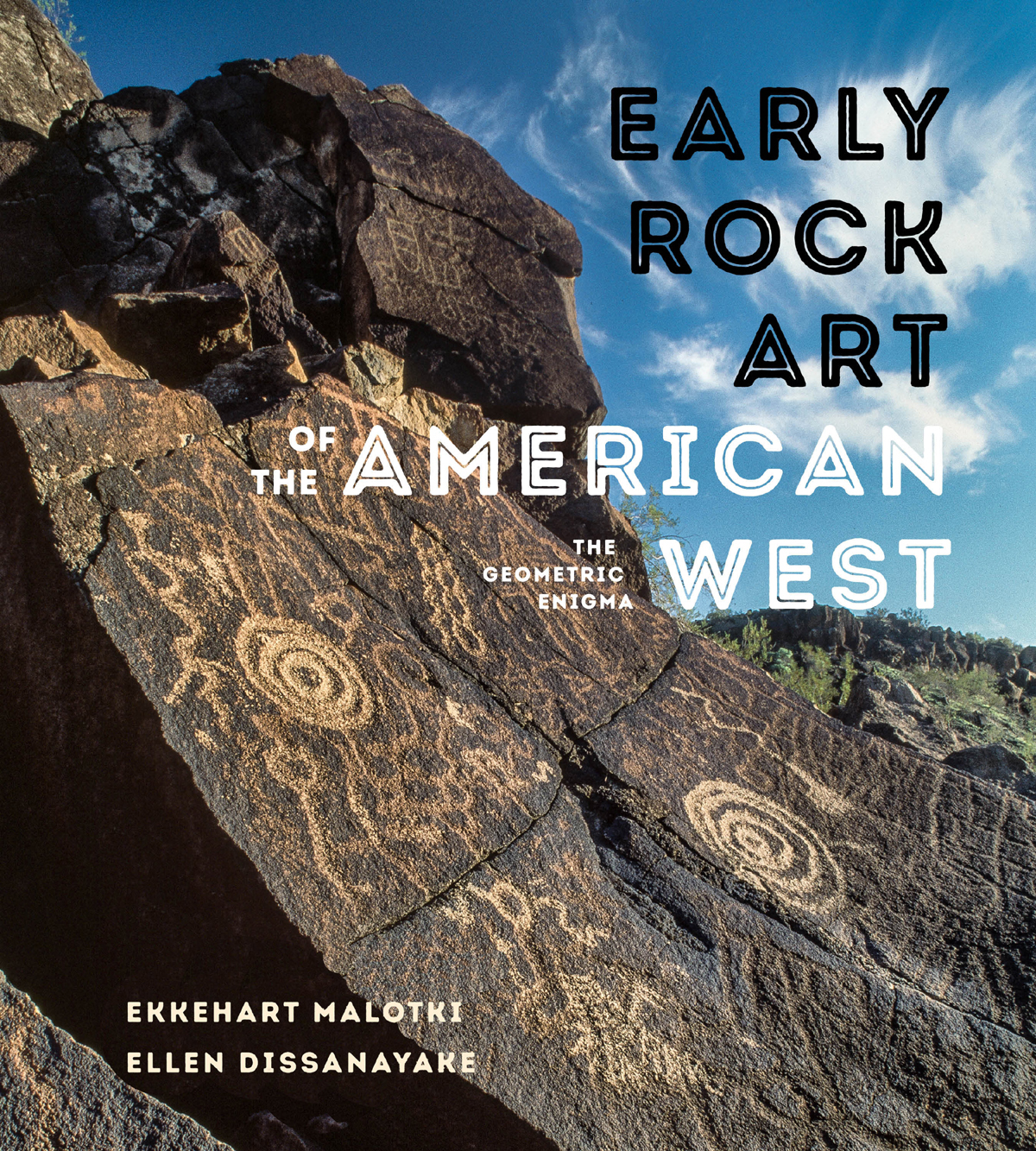 The earliest rock art — in the Americas as elsewhere — is geometric or abstract. Until Early Rock Art in the American West, however, no book-length study has been devoted to the deep antiquity and amazing range of geometrics and the fascinating questions that arise from their ubiquity and variety. Why did they precede representational marks? What is known about their origins and functions? Why and how did humans begin to make marks, and what does this practice tell us about the early human mind?

With some two hundred striking color images and discussions of chronology, dating, sites, and styles, this pioneering investigation of abstract geometrics on stone (as well as bone, ivory, and shell) explores its wide-ranging subject from the perspectives of ethology, evolutionary biology, cognitive archaeology, and the psychology of artmaking. The authors’ unique approach instills a greater respect for a largely unknown and underappreciated form of paleoart, suggesting that before humans became Homo symbolicus or even Homo religiosus, they were mark-makers - Homo aestheticus.

Praise for Early Rock Art in the American West:

“In this welcome book a long-neglected rock art tradition is examined at length. The work is so wide-ranging that any reader will also learn about many important anthropological concepts. Last but certainly not least, splendid photographs accompany the texts throughout.” - Jean Clottes, author of What Is Paleolithic Art?

“Ellen Dissanayake is always fascinating on the subject of aesthetics. Here she turns her attention to early rock art and, once again, has produced an original study that encourages us to look with new eyes at the fundamental human impulse to make marks.” - Desmond Morris, author of The Biology of Art and The Naked Ape

“A tribute to the artistic and intellectual achievements of Paleoamericans. Scholarly and innovative, sophisticated yet accessible, and with a wealth of breathtaking pictures.” - Tilman Lenssen-Erz, African Archaeology, Institute of Prehistoric Archaeology, University of Köln

“Presents new ideas on the origin and importance of art to all human cultures and shows that the neglected geometric rock art of the American West has an intriguing and essential story to tell.” - Paul Taçon, chair in Rock Art Research, Griffith University

EKKEHART MALOTKI is professor emeritus of languages at Northern Arizona University. He is the author of The Rock Art of Arizona: Art for Life’s Sake and Stone Chisel and Yucca Brush: Colorado Plateau Rock Art.

ELLEN DISSANAYAKE is an independent scholar, author, and lecturer. She is the author of Art and Intimacy: How the Arts Began; Homo Aestheticus: Where Art Comes From and Why; and What Is Art For? 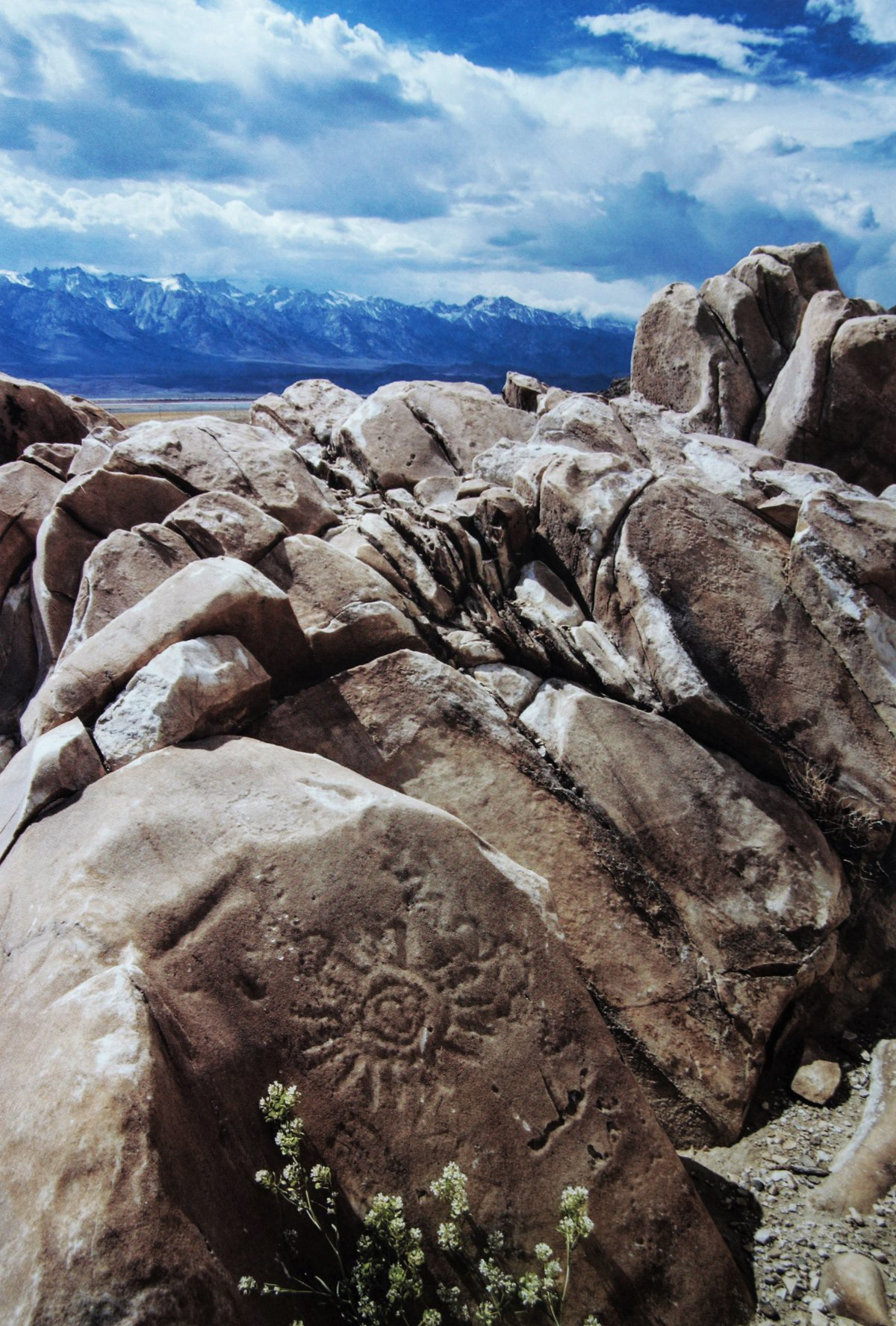 Any new publication on rock art that introduces itself so quintessentially will get my attention: 'In our view, the metaphor of a surface and a deep structure (as expressed by the Universal Grammar Theory) also holds for all known rock art in the world. Superficially, rock arts may differ drastically in style, execution, and motifs, depending on the cultural group that a given marker is born into (just as we speak the language of the group that we are born into), but underneath, in their deep structure, they are governed by innate, underlying principles, predispositions, and capacities that are universal aspects of our nature as human beings. As cultures have 'invented' their own languages, but did not invent the predisposition or ability to speak, similarly, artists and cultures have 'invented' their own arts but did not invent the predispositions and abilities to engage in and value the arts.'

The Geometric Enigma is an enjoyable and edifying journey into rock art, into the rock art of the American West and the Western Archaic Tradition (WAT), and into the essential fundamentals - or fundamental essentials - of being human, of being expressive, and of being mark-makers.

Let's get one thing straight. 'Art' is a super-category - too big a tarpaulin for a group of sentient humans to hold down. More appropriate is the term 'artification' which is the outcome of an activity, the process not the product, the behaviour behind the piece. The point is brought home with an explanation of cupules, found all over the world and still with no real explanation; what if the cupules themselves are merely a physical by-product of, let's say, a cultural ritual. The cupule is the only trace of the ritual.

In searching for explanations and interpretations, the authors tread carefully. On the one hand, they remind us that the Pleistcene is embedded in our genes; we are still the hunter gatherer. It would appear that 'principal lineaments of human nature are the same in societies around the world, suggesting that all are inherited from a single source.' We are still a 'society of intimates' predisposed to art, and to 'artify'. We are 'cultural creatures' with shared intense experiences. And, as Jean Clottes proposes, Homo spiritualis artifax might be a more appropriate appelation than Homo sapiens because of the close bond between spirituality and art.

On the other hand, Malotki and Dissanayake point out how far removed we are from our prehistoric ancestors, and how Western preconceptions about the arts are largely irrelevant to rock art studies. Early mark-makers were nonliterate and therefore had different minds from ours today; how can we possibly understand them? 'Modern thought is scriptocentric in the same way that the pre-Copernican world was geocentric. It is too easy, in thinking about behaviourally and cognitively modern humans, to assume that, apart from living outdoors, they were just like us.'

Following this thread, that ancient marks on rocks is a mysterious and tangible link to the past is a given. But we are reminded that we should not be considering when did we become modern? but asking if we can understand the early human mind. After all, 'keeping track of the rapidly emerging evidence is akin to keeping track of the puck in an ice hockey match.' Despite this, the publication addresses fundamental questions: when did cognitive modernity begin, was there a creative explosion (or was it more of a mosaic development) and when did it arrive in the New World? Moreover, did the artists of the New World arrive with a blank artisitic slate? How and when were undefined open spaces transformed into specific meaningful places? Did the Western Archaic Tradition style derive from elsewhere or evolve in situ? And why abstact-geometric rock art? Why did the Palaeoamerican immigrants to the New World - in a world full of animals for nomadic hunter-gatherers who were as cognitively modern as their sapiens cousins elsewhere in the world - chose to create abstract-geometric art?

The authors also explore why human cultures have always devoted time and energy to artification. The answer may lie in the 'ritual'. As we know, rituals mark important stages in life, and rituals and artification seem to go hand in hand; 'the ordinary becomes the extraordinary, uncertain circumstances are given certainty, existential anxiety is given communal reassurance. For our ancestors, human cooperation, religion and rituals composed of ratifications came together as a sacred trilogy.' Whilst the rock art images themselves remain stubbornly mute, they were clearly imbued with meaning and significance for the native peoples. This in itself should encourage us all to recognise and preserve them.

I have listed many of the fascinating questions raised by this publication. To provide the answers would be a massive spoiler. Suffice to say, Early Rock Art of the American West: The Geometric Enigma provides an understanding of rock art - generally and in the American West - that wins it a place in every serious library for both the specialist and the non-specialist.