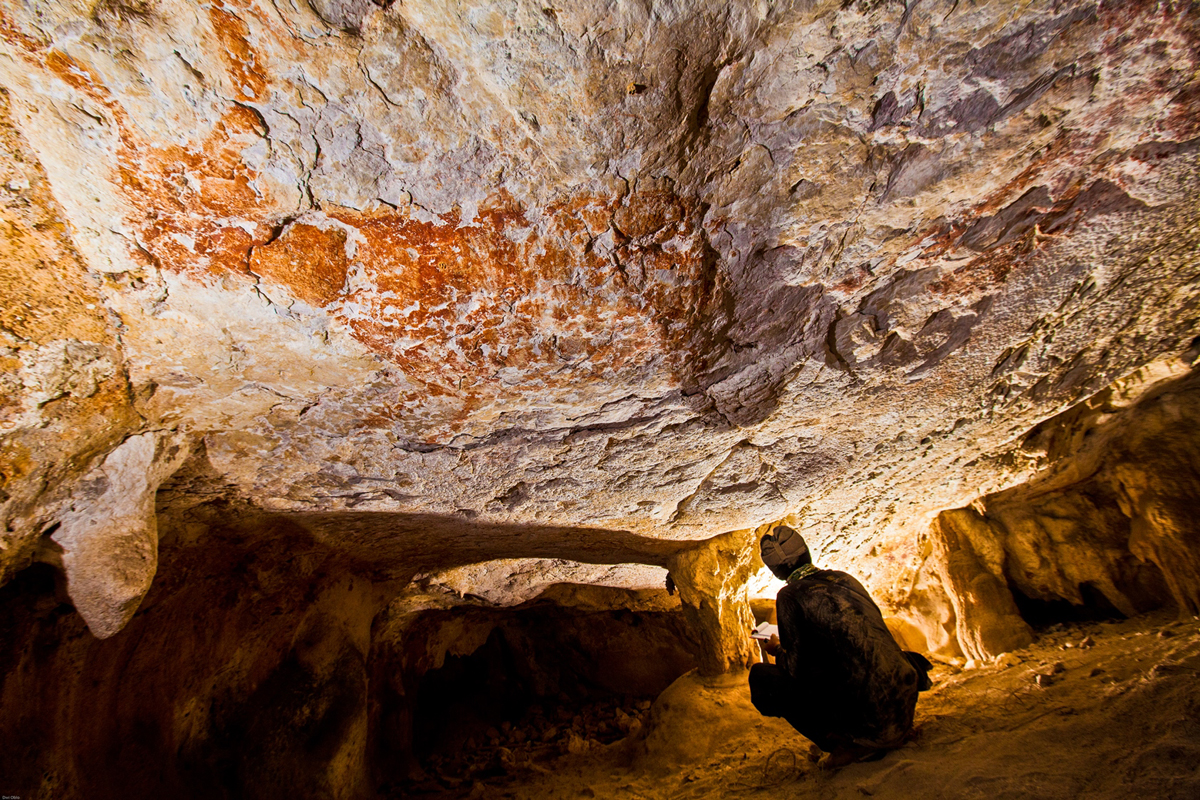 Griffith University researchers have dated cave paintings in Borneo to as early as 40,000 years ago, proving that they are among the world's oldest examples of figurative rock art. It also adds to the mounting view that the highly significant cultural innovation of cave art did not arise exclusively in Europe, and that 'ice age' artists in Southeast Asia played a key role in its development. Since the 1990s, caves in remote and rugged mountains of East Kalimantan, an Indonesian province of Borneo, have been known to contain prehistoric paintings, drawings, and other imagery, including thousands of hands stencils, animals, abstract signs and symbols, and related motifs. 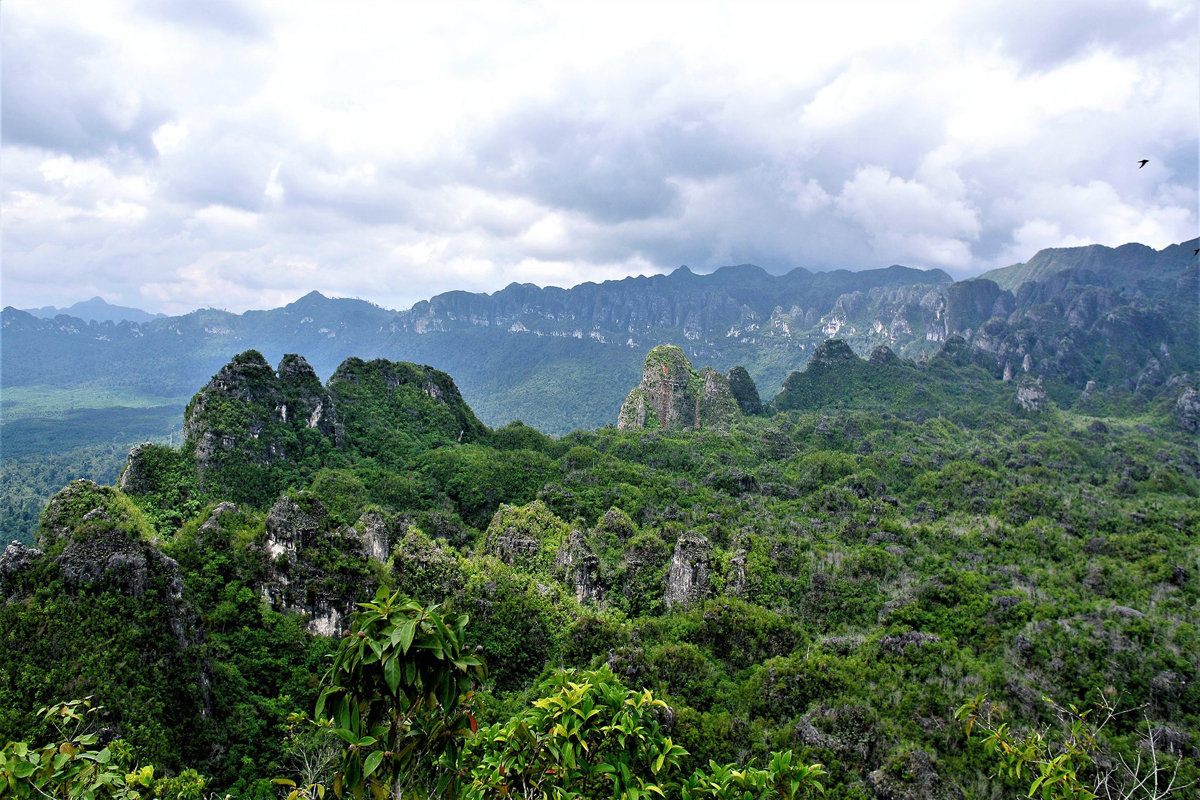 These illusive and remote artworks are now known to be far older than previously thought, according to a study led by Griffith's Associate Professor Maxime Aubert, along with Indonesia's National Research Centre for Archaeology (ARKENAS), and the Bandung Institute of Technology (ITB), published today in Nature. Associate Professor Aubert's team reports Uranium-series dates obtained from calcium carbonate samples collected from the Kalimantan cave art, providing the first reliable estimates for the approximate time of rock art production. Aubert explains that the oldest cave art image to be dated is a large painting of an unidentified animal, probably a species of wild cattle still found in the jungles of Borneo, with a minimum age of around 40,000 years; it is now the earliest known figurative artwork. 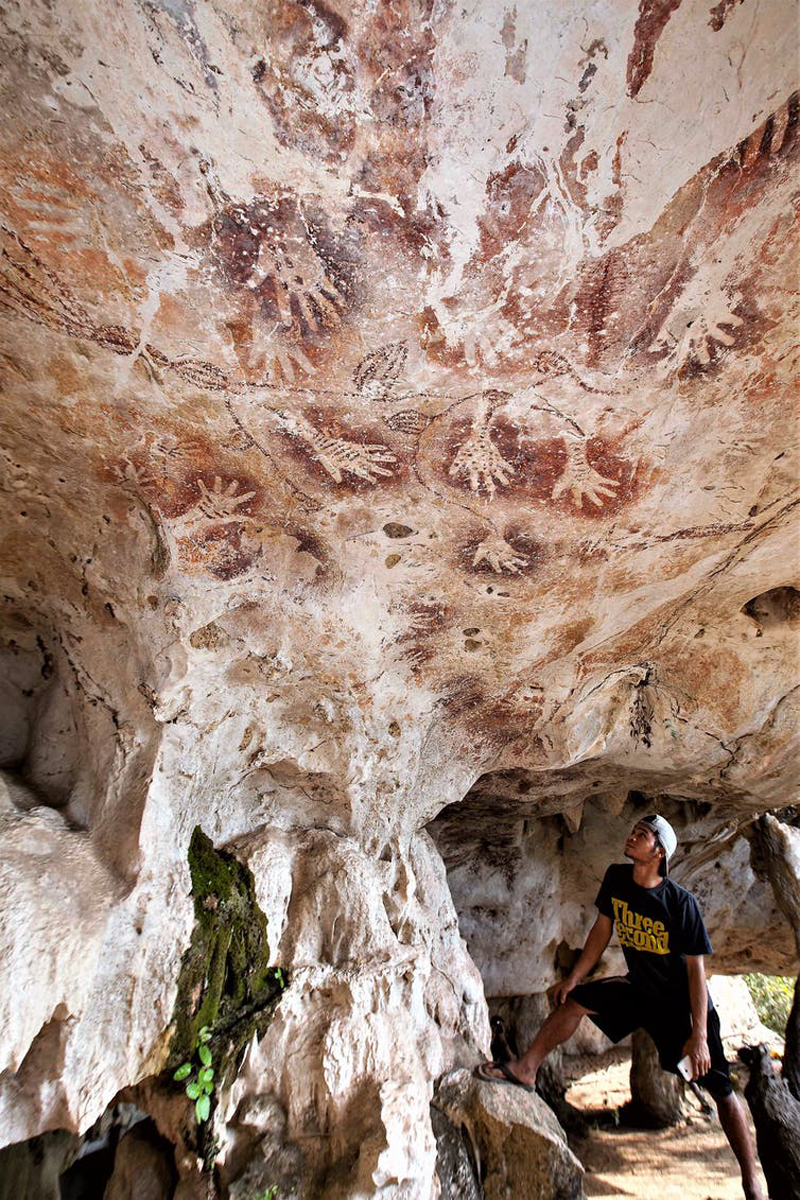 The Kalimantan stencil art was shown to be similar in age, suggesting that a Palaeolithic rock art tradition first appeared on Borneo between about 52,000 and 40,000 years ago. Dating also indicated that a major change occurred within this culture around 20,000 years ago, giving rise to a new rock art style (including rare portrayals of humans) at a time when the global ice age climate was at its most extreme. Co-leader Dr Pindi Setiawan, an Indonesian archaeologist and lecturer at ITB, admits that the identity of the ice age artists of Borneo is a mystery. Setiawan has studied the art since its discovery, and, along with ARKENAS rock art expert Adhi Agus Oktaviana, leads expeditions to the Kalimantan caves. 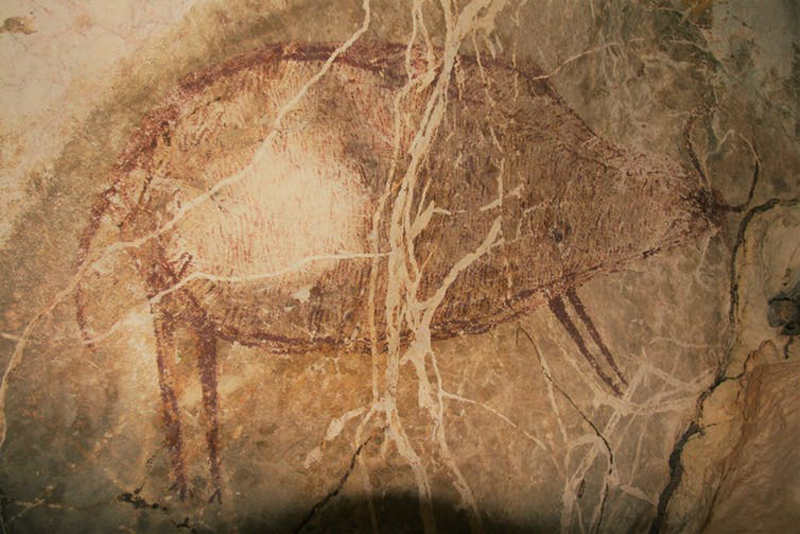 A rock painting of a banteng, a type of wild cattle from Borneo. Image: Pindi Setiawan

Europe has long been seen as the centre for cave art development. But although Borneo is the Earth's third largest island, throughout most of the ice age it actually formed the easternmost tip of the vast continental region of Eurasia - at the western extremity of this 13,000 km-wide landmass was Europe.

Associate Professor Adam Brumm, a Griffith archaeologist also involved in the study, postulates that two early cave art provinces arose at a similar time in remote corners of Palaeolithic Eurasia: one in Europe, and one in Indonesia at the opposite end of this ice age world.

A 2014 Nature paper published by Associate Professors Aubert and Brumm (with ARKENAS) revealed that similar cave art appeared in the island of Sulawesi about 40,000 years ago. Sulawesi lies off the edge of Eurasia and is a vital stepping-stone between Asia and Australia. Associate Professor Aubert goes on to say that their research suggests that rock art spread from Borneo into Sulawesi and other new worlds beyond Eurasia, perhaps arriving with the first people to colonise Australia.

Abstract
Figurative cave paintings from the Indonesian island of Sulawesi date to at least 35,000 years ago (ka) and hand-stencil art from the same region has a minimum date of 40 ka. Here we show that similar rock art was created during essentially the same time period on the adjacent island of Borneo. Uranium-series analysis of calcium carbonate deposits that overlie a large reddish-orange figurative painting of an animal at Lubang Jeriji Saléh limestone cave in East Kalimantan, Indonesian Borneo yielded a minimum date of 40 ka, which to our knowledge is currently the oldest date for figurative artwork from anywhere in the world. In addition, two reddish-orange-coloured hand stencils from the same site each yielded a minimum uranium-series date of 37.2 ka, and a third hand stencil of the same hue has a maximum date of 51.8 ka. We also obtained uranium-series determinations for cave art motifs from Lubang Jeriji Saléh and three other East Kalimantan karst caves, which enable us to constrain the chronology of a distinct younger phase of Pleistocene rock art production in this region. Dark-purple hand stencils, some of which are decorated with intricate motifs, date to about 21-20 ka and a rare Pleistocene depiction of a human figure also coloured dark purple has a minimum date of 13.6 ka. Our findings show that cave painting appeared in eastern Borneo between 52 and 40 ka and that a new style of parietal art arose during the Last Glacial Maximum. It is now evident that a major Palaeolithic cave art province existed in the eastern extremity of continental Eurasia and in adjacent Wallacea from at least 40?ka until the Last Glacial Maximum, which has implications for understanding how early rock art traditions emerged, developed and spread in Pleistocene Southeast Asia and further afield.

The accompanying Conversation article can be read here:
Read more