An article released from Flinders University on phys.org - Modern analysis of rock art: Machine learning opens new doors in archaeology - reports on how the rock art of human figures created over thousands of years in Australia's Arnhem Land has been put through a transformative machine learning study, using a machine learning approach called 'transfer learning', to analyse style changes over the years. 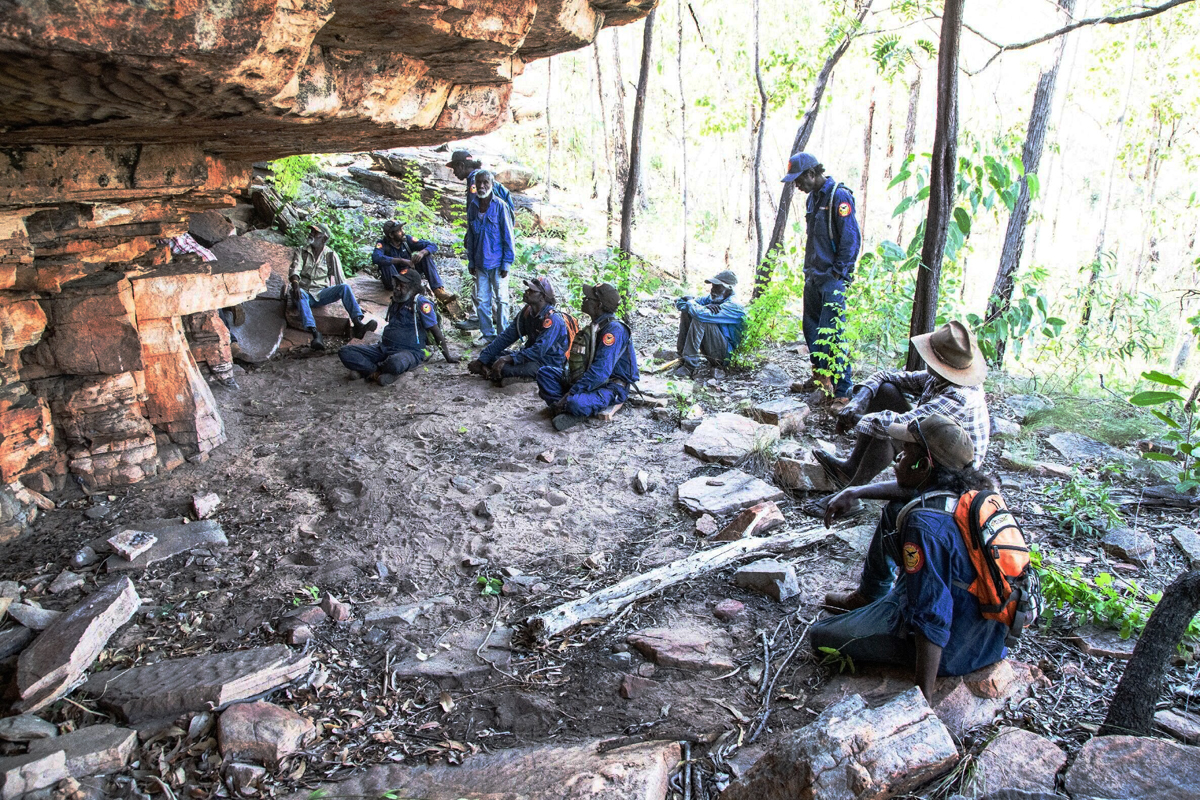 (Included in the photo above are co-authors Abraham Wesan (left in khaki shirt), Dudley Lawrence (stand with a beard to Abraham's left and other Elders Robert Redford (cap and blue shirt) and Jack Docherty (Akubra hat). This site was a stopover and camping site still used up until the late 1970's. Robert Redford walked the Wilton River route back to his family's outstation near Maningrida.)

Working with the Mimal and Marrku Traditional Owners of the Wilton River area in Australia's Top End, South Australian researchers led by Flinders University archaeologist Dr. Daryl Wesley have taken a closer look at the art of this region.

Flinders researcher Jarrad Kowlessar and the team used machine learning to analyse images of rock art collected during surveys in Marrku country in 2018 and 2019.

The reconstructed rock art chronology, recently published in Australian Archaeology, uses existing data sets of more than 14 million different photos of a wide range of things from animals such as dogs, cats, lizards and insects to objects like chairs, tables and cups.

"In total the computer saw more than 1000 different types of objects and learned to tell the difference between them just by looking at photos of them," Dr. Wesley explains. "The important skill this computer developed was a mathematical model that has the ability to tell how similar two different images are to one another." Then the mathematical modelling was applied to the images collected in northern Australia.

Dr. Wesley explains "This approach allows us to use the computer program to show how unique the rock art is in the Wilton River and how it relates to the rock art in other parts of Arnhem Land. We can use this to help to show how rock art styles are shared by Traditional Owners in Arnhem Land and which are unique to each group through the past."

Machine learning allows a computer to 'learn' different things about information that may take a human many years to look through and learn from, explains a Flinders University Ph.D. candidate in archaeology Jarrad Kowlessar, who has pioneered the machine learning approach for rock art analysis: "One amazing outcome is that the machine learning approach ordered the styles in the same chronology that archaeologists have ordered them in by inspecting which appear on top of which. This shows that similarity and time are closely linked in the Arnhem Land rock art and that human figures drawn closer in time were more similar to one another then those drawn a long time apart. For example the machine learning algorithm has plotted Northern Running figures and Dynamic figures very close to one another on the graph it produces. This shows that these styles which we know are closer to each other in age are also closer to each other in appearance, which might be a very hard thing to notice without an approach like this".

The article points out the new methodology removed a large degree of individual human interpretation and possible bias by using the machine learning approach 'transfer learning', allowing the computer to understand how each style related to one another directly—independently of the researchers involved. Researchers are enthusiastic about this methodology breaking new ground for a large amount of archaeological research to understand all sorts of different human material culture in a different way.