An article by the University of Aberdeen on scitechdaily.com - Archaeologists Find One of the Most Significant Carved Stone Monuments Ever Uncovered in Scotland - reports on a rare Pictish symbol stone found near potential site of famous battle. 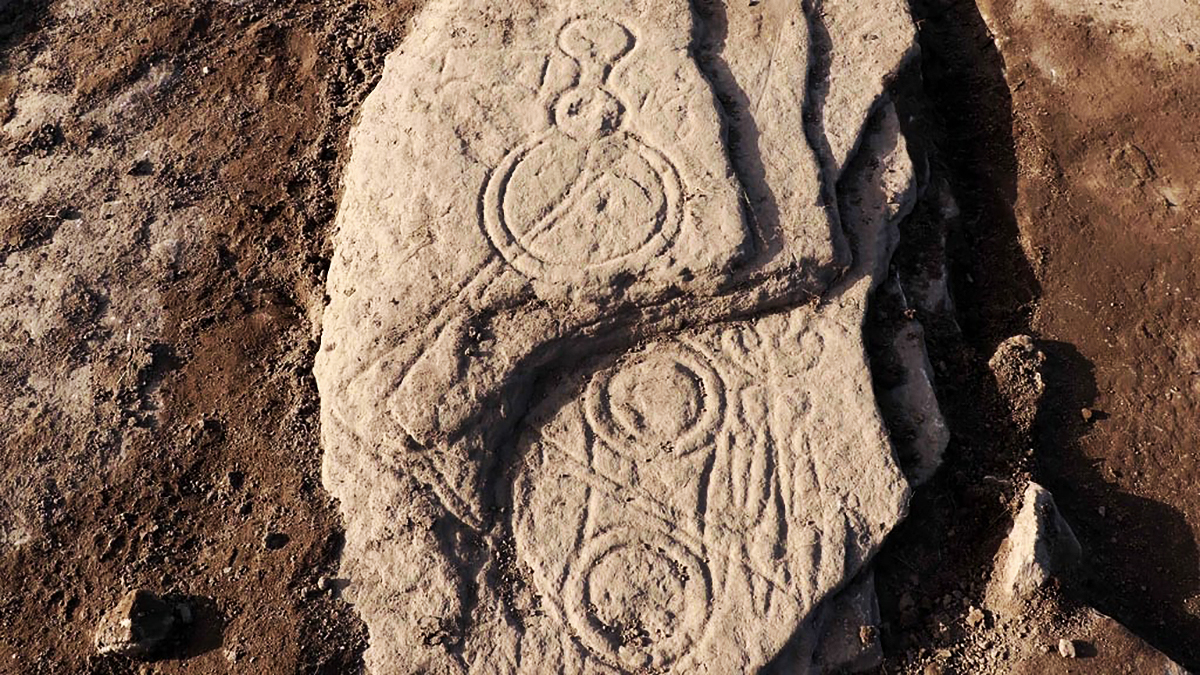 Archaeologists have uncovered a Pictish symbol stone close to the location of one of the most significant carved stone monuments ever uncovered in Scotland.

The team from the University of Aberdeen hit upon the 1.7 meter-long stone in a farmer’s field while conducting geophysical surveys to try and build a greater understanding of the important Pictish landscape of Aberlemno, near Forfar. 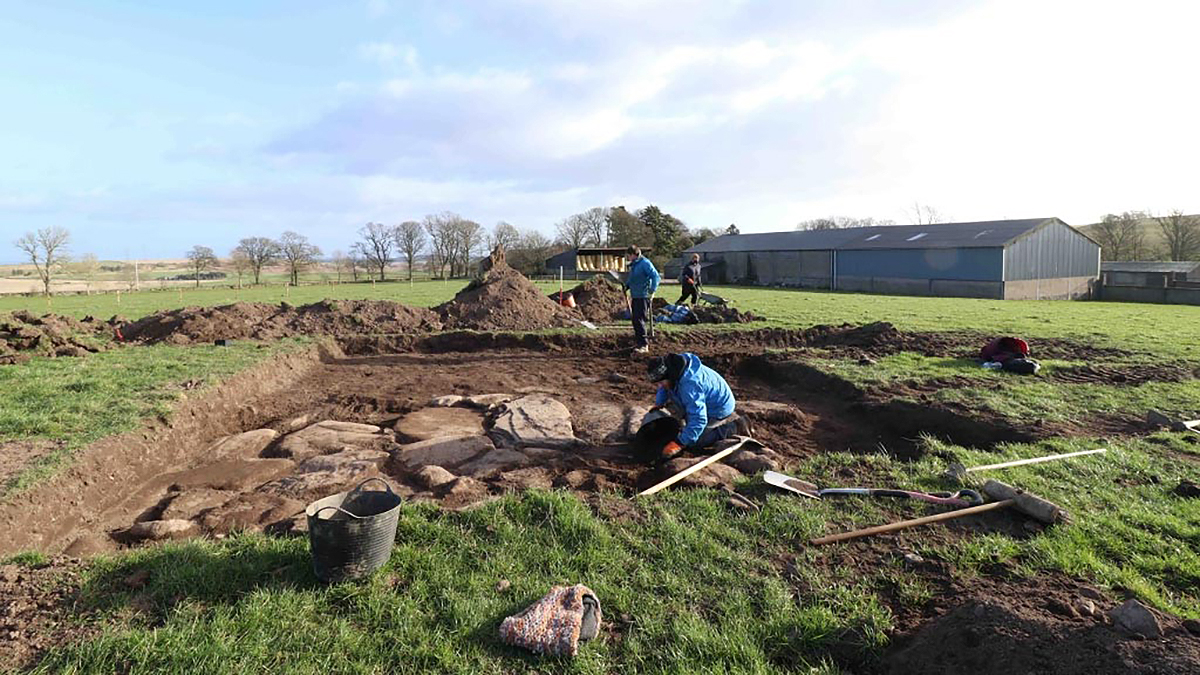 Aberlemno is already well known for its Pictish heritage thanks to its collection of unique Pictish standing stones the most famous of which is a cross-slab thought to depict scenes from a battle of vital importance to the creation of what would become Scotland – the Battle of Nechtansmere. 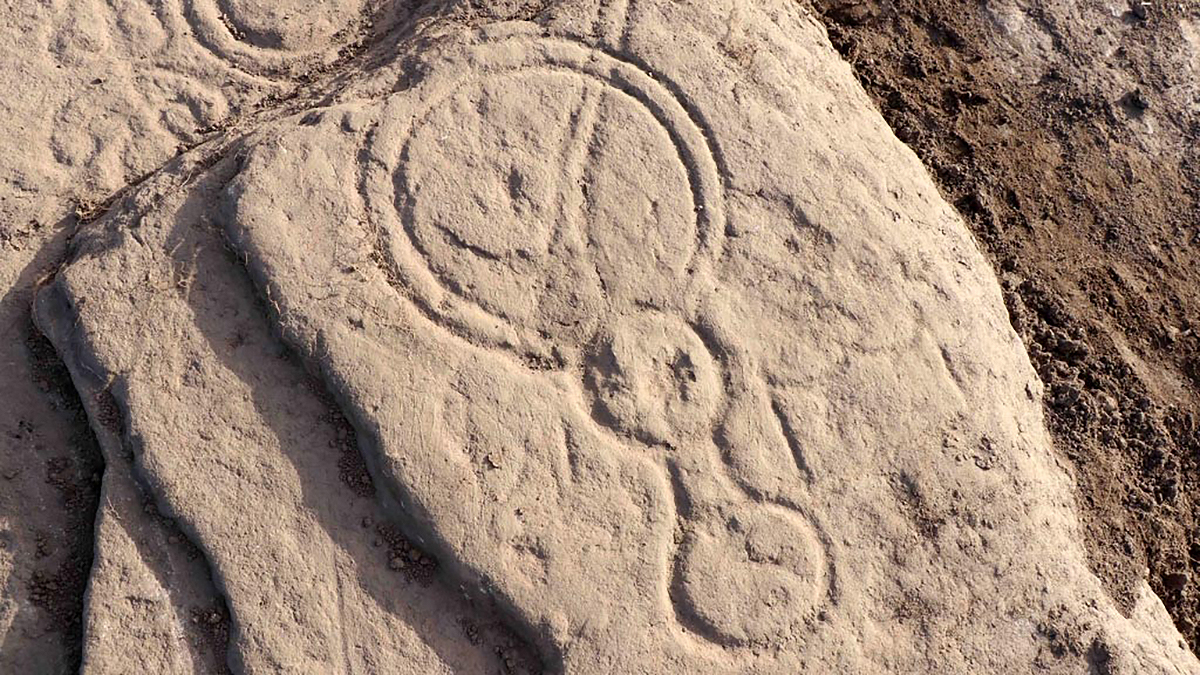 Close up detail of a mirror carved into a Pictish symbol stone uncovered in a field in Aberlemno. Credit: University of Aberdeen

The archaeologists were conducting geophysics surveys of the ground early in 2020 in an effort to better understand the history of the existing stones as part of the Leverhulme Trust funded Comparative Kingship project.

Taking imaging equipment over the ground, they found anomalies that looked like evidence of a settlement.

A small test pit was dug to try and establish whether the remains of any buildings might be present but to their surprise, the archaeologists came straight down onto a carved Pictish symbol stone, one of only around 200 known.

Their efforts to establish the character of the stone and settlement were hindered by subsequent Covid lockdowns and it was several months before they were able to return to verify their find.

The team think the stone dates to around the fifth or sixth century and, over the last few weeks, they have painstakingly excavated part of the settlement and removed it from its resting place — finding out more about the stone and its setting.

Professor Gordon Noble who leads the project says stumbling upon a stone as part of an archaeological dig is very unusual.

“Here at the University of Aberdeen we’ve been leading Pictish research for the last decade but none of us have ever found a symbol stone before,” he said.

“There are only around 200 of these monuments known. They are occasionally dug up by farmers plowing fields or during the course of road building but by the time we get to analyze them, much of what surrounds them has already been disturbed.

“To come across something like this while digging one small test pit is absolutely remarkable and none of us could quite believe our luck.

“The benefits of making a find in this way are that we can do much more detailed work in regard to the context. We can examine and date the layers underneath it and extract much more detailed information without losing vital evidence.”

Research fellow Dr. James O’Driscoll who initially discovered the stone describes the excitement: “We thought we’d just uncover a little bit more before we headed off for the day. We suddenly saw a symbol. There was lots of screaming. Then we found more symbols and there was more screaming and a little bit of crying!

“It’s a feeling that I’ll probably never have again on an archaeological site. It’s a find of that scale.”

Like the other stones at Aberlemno, the new discovery appears to be intricately carved with evidence of classic abstract Pictish symbols including triple ovals, a comb and mirror, a crescent and V rod, and double discs. Unusually the stone appears to show different periods of carving with symbols overlying one another.

The stone has now been moved to Graciela Ainsworth conservation lab in Edinburgh where more detailed analysis will take place.