An article by Michael Irving on newatlas.com - Hat trick: How the Easter Islanders capped off their huge statues - reports on research by anthropologists shedding light on the engineering ingenuity of the Rapa Nui people. 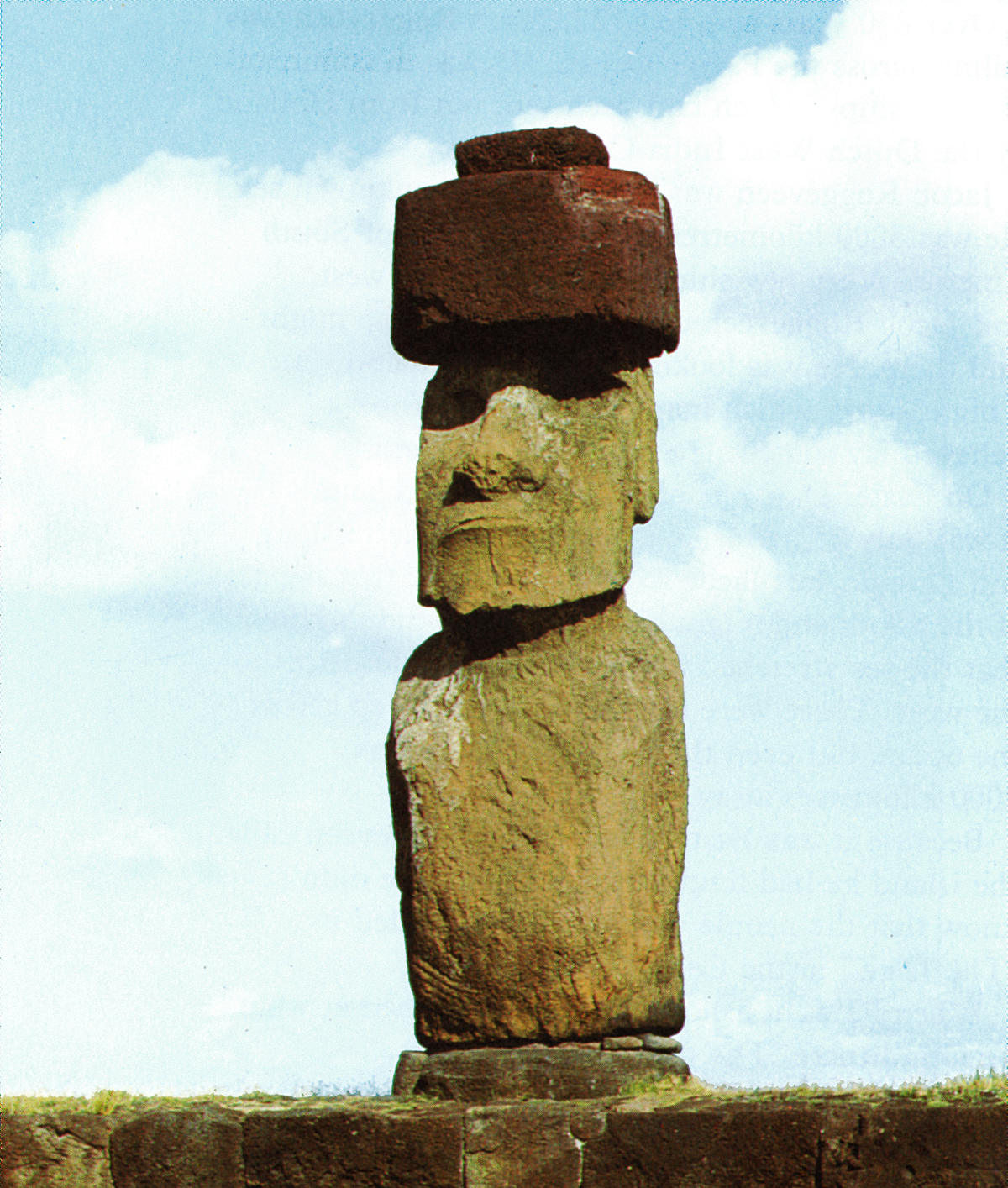 Almost 900 imposing moai dot the incredibly-isolated island of Rapa Nui, also known as Easter Island. Carved between 300 and 900 years ago, these giant stone statues can stand up to 10 m tall and weigh up to 81 tons.

Some of the moai are wearing hats known as pukao. But these hats aren't just part of the statue - they're separate pieces made out of a different type of rock. The moai are mostly carved out of volcanic tuff, while the pukao are made of red scoria, which is found in another quarry some 12 km away from the one where the volcanic tuff was sourced.

It's not known just how the Rapa Nui people transported the hats across the island, before raising them - given they can weigh up to 13 tons each - to the top of the tall statues. Researchers from Penn State set out to determine the most likely method, based on the shape and features of both the hats and the statues.

Study authors Carl Lipo (left) and Terry Hunt (right) examining a pukao on the ground. A row of moai statues on Easter Island, one with a pukao. Images: Sean Hixon/Penn State

Sean Hixon, co-author of the study, states that they were interested in figuring out the method of hat transport and placement of the hats that best agrees with the archaeological record. They assumed they were all transported and placed in the same way, so they looked for features that were the same on all the hats and all the statues.

Using surveying photography techniques and 3D imaging, the team found that all the hats had indentations in their bases that were designed to fit neatly over the moai's heads. But there was no damage to the soft stone along the edges of these indentations, indicating that they hadn't been slid into place.

It has previously been suggested that the hats met heads before the statues were erected, but now there seems to be plenty of evidence to the contrary. Due to their sheer size, when a statue toppled over during transport, the Rapa Nui tended to just leave it where it fell, and there are no pukao or traces of red scoria around any of these fallen moai.

Map of Easter Island, including the locations of pukao (green) and the two quarries – Puna Pau, where the red scoria for the hats came from, and Rano Raraku, where the volcanic tuff for the statues was sourced. Image: Lipo / Hunt / Hixon / et al

Where there are traces of scoria, however, are around the bases of the standing statues with pukao, which indicates that further carving work was done near the site. The Penn State researchers believe that the Rapa Nui people rolled cylindrical blocks of the rocks to the foot of the moai, then carved the hats and raised them. This is backed up by the observation of larger blocks of red scoria around the island, suggesting abandoned pukao.

Carl Lipo, co-author of the study, states that the best explanation for the transport of the pukao from the quarry is by rolling the raw material to the location of the moai. Once at the moai, the pukao were rolled up large ramps to the top of a standing statue using a parbuckling technique.

A diagram of how the Rapa Nui people might have used the parbuckling technique to raise the stone hats onto the heads of the statues. Image: Sean Hixon/Penn State

Parbuckling, the researchers explain, is an ancient method of moving round objects up ramps. If the Rapa Nui used this technique, they would have built a wooden ramp from the ground to the top of the moai's head. The middle of a long rope is attached to the higher end of the ramp, so the two ends run the length of the ramp and reach the bottom. The rope ends pass underneath the pukao and back over the top, where groups of people can then pull it up the ramp. The researchers estimate that it would take less than 15 people to get the pukao in place. Once at the right height, the cylinders were carved into the hat shape, rotated 90 degrees and tilted into place on the head using wooden levers.

The research was published in the Journal of Archaeological Science.