These ancient cultural landscapes do not end at the waterline – they continue into the blue, onto what was once dry land. Jerem Leach, DHSC Project, Author provided.

For most of the human history of Australia, sea levels were much lower than they are today, and there was extra dry land where people lived. Archaeologists could only speculate about how people used those now-submerged lands, and whether any traces remain today. 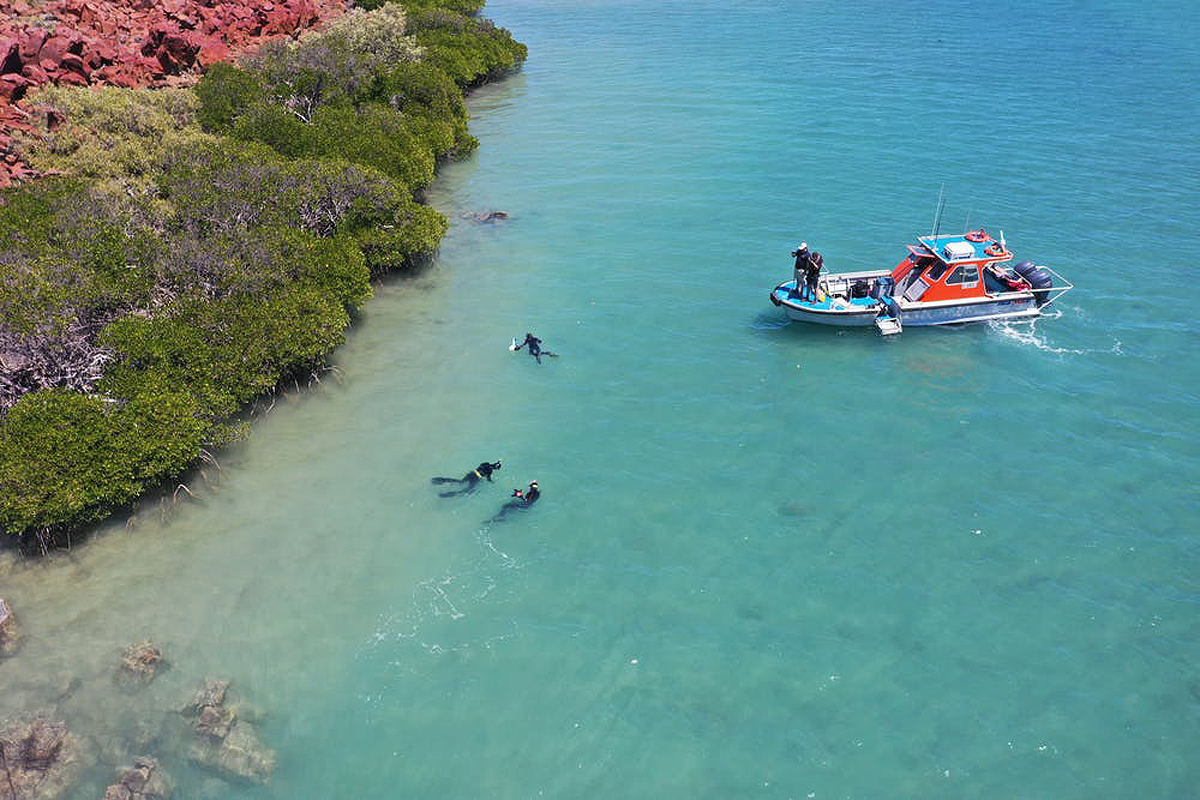 Archaeologists working in the shallow waters off Western Australia. Future generations of archaeologists must be willing to get wet! Jerem Leach, DHSC Project, Author provided.

Between 18,000 and 8,000 years ago the world warmed up. Melting ice sheets caused sea levels to rise. Tasmania was cut off from the mainland around 11,000 years ago. New Guinea separated from Australia around 8,000 years ago. The sea-level rise flooded 2.12 million square kilometres of land on the continental shelf surrounding Australia. Thousands of generations of people would have lived out their lives on these landscapes now under water. 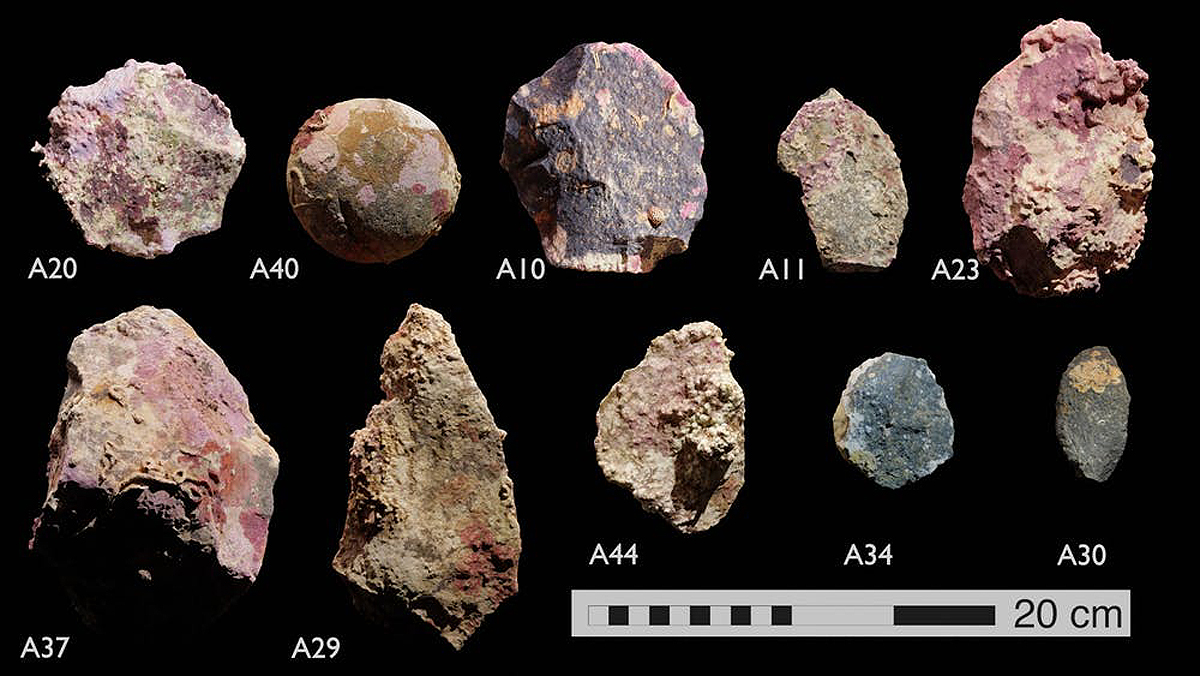 A selection of stone artefacts found on the seabed during fieldwork. John McCarthy and Chelsea Wiseman, Author provided.

For the past four years a team of archaeologists, rock art specialists, geomorphologists, geologists, specialist pilots and scientific divers on the Australian Research Council-funded Deep History of Sea Country Project have collaborated with the Murujuga Aboriginal Corporation to find and record submerged archaeological sites off the Pilbara coast in WA.

The team studied navigation charts, geological maps and archaeological sites located on the land to narrow down prospective areas before surveying the seabed using laser scanners mounted on small planes and high-resolution sonar towed behind boats. In the final phase of the research, the team of scientific divers carried out underwater archaeological surveys to physically examine, record and sample the seabed.

The team discovered two underwater archaeological sites in the Dampier Archipelago. The first, at Cape Bruguieres, comprises hundreds of stone artefacts - including mullers and grinding stones - on the seabed at depths down to 2.4m. At the second site, in Flying Foam Passage, they discovered traces of human activity associated with a submerged freshwater spring, 14m below sea level, including at least one confirmed stone cutting tool made out of locally sourced material.

Environmental data and radiocarbon dates show these sites must have been older than 7,000 years when they were submerged by rising seas. The study shows archaeological sites exist on the seabed in Australia with items belonging to ancient peoples undisturbed for thousands of years. In Murujuga (also known as the Burrup Peninsula) this adds substantially to the evidence they already have of human activity and rock art production in this important National Heritage Listed place.

The submerged stone tools discovered at Murujuga make the team rethink what they know about the past. Their knowledge of ancient times in Australia comes from archaeological sites on land and from Indigenous oral histories. But the first people to come to Australian shores were coastal people who voyaged in boats across the islands of eastern Indonesia. The early peopling of Australia took place on land that is now under water. To fully understand key questions in human history, as ancient as they are, researchers must turn to both archaeology and marine science.

Submerged archaeological sites are in danger of destruction by erosion and from development activities, such as oil and gas installations, pipelines, port developments, dredging, spoil dumping and industrialised fishing. Protection of underwater cultural sites more than 100 years old is enshrined by the UNESCO Convention on the Protection of the Underwater Cultural Heritage (2001), adopted as law by more than 60 countries but not ratified by Australia.

In Australia, the federal laws that protect underwater cultural heritage in Commonwealth waters have been modernised recently with the Historic Shipwrecks Act (1976) reviewed and re-badged as Australia’s Underwater Cultural Heritage Act (2018), which came into effect in July 2019. This new Act fails to automatically protect all types of sites and it privileges protection of non-Indigenous submerged heritage. For example, all shipwrecks older than 75 years and sunken aircraft found in Australia’s Commonwealth waters are given automatic protection.

Other types of site, regardless of age and including Aboriginal and Torres Strait Islander sites, can be protected but only with ministerial approval. There is scope for states and territories to protect submerged Indigenous heritage based on existing laws, but regulators have conventionally only managed the underwater heritage of more recent historical periods.

With the team's find confirming ancient Indigenous sites can be preserved under water, policy makers need to reconsider approaches to protecting underwater cultural heritage in Australia. The team is confident many other submerged sites will be found in the years to come. These will challenge our current understandings and lead to a more complete account of our human past, so they need our protection now.