Cupules and Vulvas in the Alwar area, Rajasthan

Rajasthan is the biggest State in India - around 342,239 square kilometres. It is located in the north western part of the subcontinent, adjacent to Madhya Pradesh. The Chambal valley connects the two states.

Alwar district is well known for its prehistoric sites. Surrounded by the green hills of the Aravalli mountains (below). 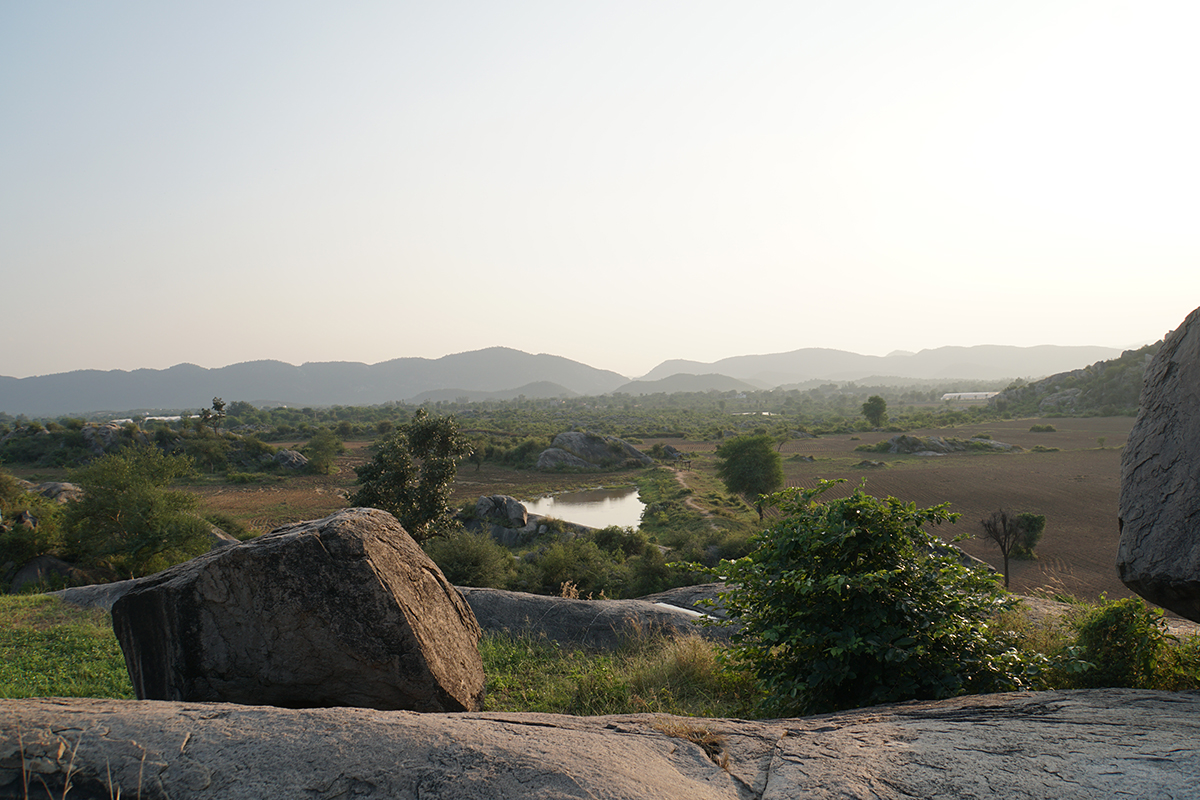 Landscape, surrounded by the green hills of the Aravalli mountains. Image: Meenakshi Dubey-Pathak

Deep valleys and thick forests have plenty of wildlife and birds. The landscape of Sariska comprises hills and narrow valleys of the Aravalli hill range. Sariska tiger reserve is not far from the Tahla Village. The forests of Sariska consist of grasslands, dry deciduous forests, tropical forests, and scrub-thorny arid forests. Located approximately 100 kms from Pink City/Jaipur of India, Sariska National Park or Sariska Tiger Reserve is one of the famous places for tiger sightings in India.

Alwar is one of the oldest cities in Rajasthan. Its tradition goes back to at least 1500 BC. It was then famous as Viratnagar, a capital of the Matsyas Kingdom, as described in the Mahabharat.

Rock art is abundant in various parts of Rajasthan, mainly in the Alwar Kota and Bundi area (Dupey-Pathak & Clottes 2017). Other work has been done on the rock art in Rajasthan, eg. Murarilal Sharma has worked in northern Rajasthan. Cupules have been found in two sites near Jhirna (Sharma & Meena 2008). At Bajni Bhat (Alwar District), where 67 cupules have been found, most of the cupules in the rock shelter have been executed on the vertical wall. (Sharma 2012: 269). At Bajni Bhat and Jhiri Nala, microerosion analyses at two of these sites has provided only Holocene ages so far (Bednarik & Kumar 2002, Bednarik 2008:77).

During my latest trip to Rajasthan particularly, in the Alwar district in the Tahla village, I found many cupules and vulvas closely associated with natural holes on the flat surface of granite rocks and boulders. The whole area comes under the buffer zone of the Sariska tiger reserve.

Description- Long range granite rocks or huge size boulders havie many cup marks. The boulders are located around villages named Murlipura, Losal, Naadu, Chawa ka bas, Ghevar. They are made up of Igneous Rocks. Local villagers/shepherds regularly bring their cattle to feed on bushes and shrubs near the boulders. Near the Losal village, many big clusters of boulders are located there. Five groups contain a number of cup marks (below) in different sizes and some are in rows of two or three. Some are deep and some are shallow. On the ground I have found some stone tools. In and around the boulders many wild animals like Leopard, Hyena, Jackals, Wild Boars, Nilgai and Mongoose can be seen. 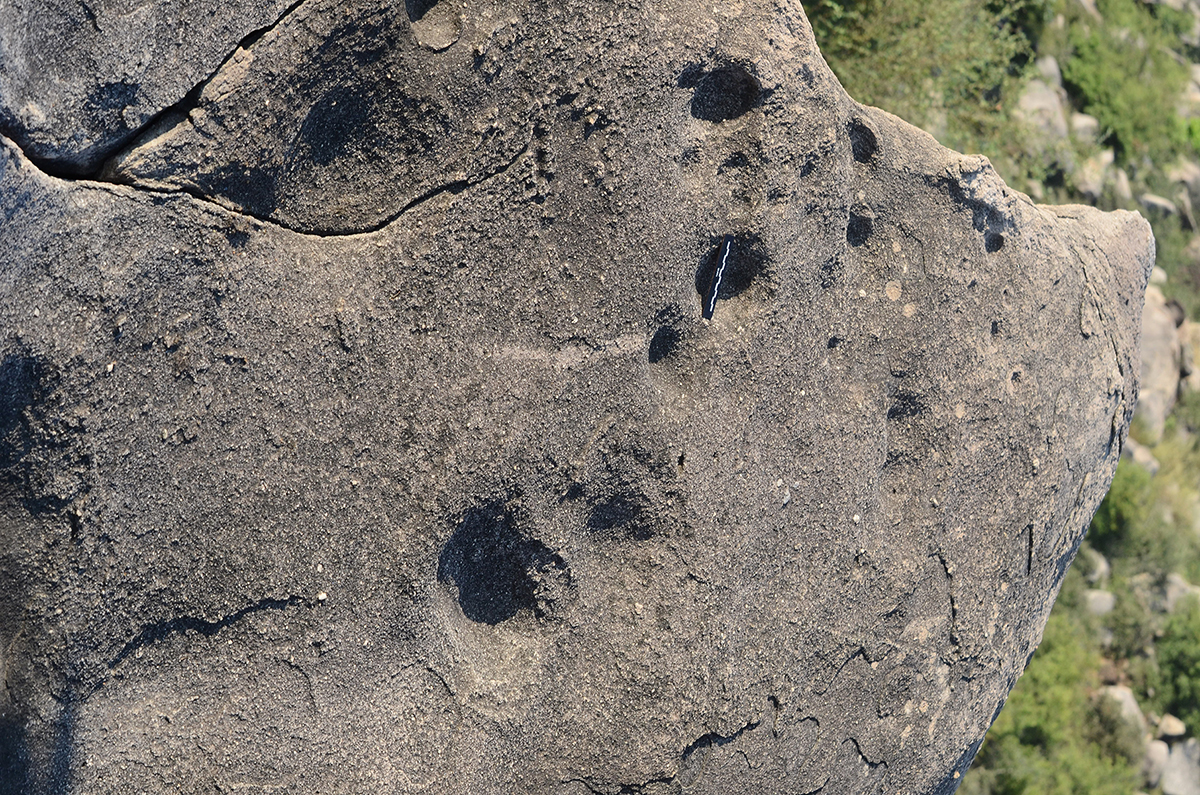 These granite boulders are full of cup marks and cupules but I have noticed that vulvas are not so common in this area. Sometimes, natural marks have been retouched to make vulva shapes. A long range of granite rocks and boulders are located in the outskirts of the Naadu village. This particular area, frequented by leopards, is known as the Leopards point. In small caves/cavities occupied by them we found scat and pugmarks of mother and cubs.

A big flattish rock with many natural deep marks seems to be retouched and small ones are engraved next to big ones. Both slopes of this big rock are marked with many vulvas. Its middle part is without any retouched marks. 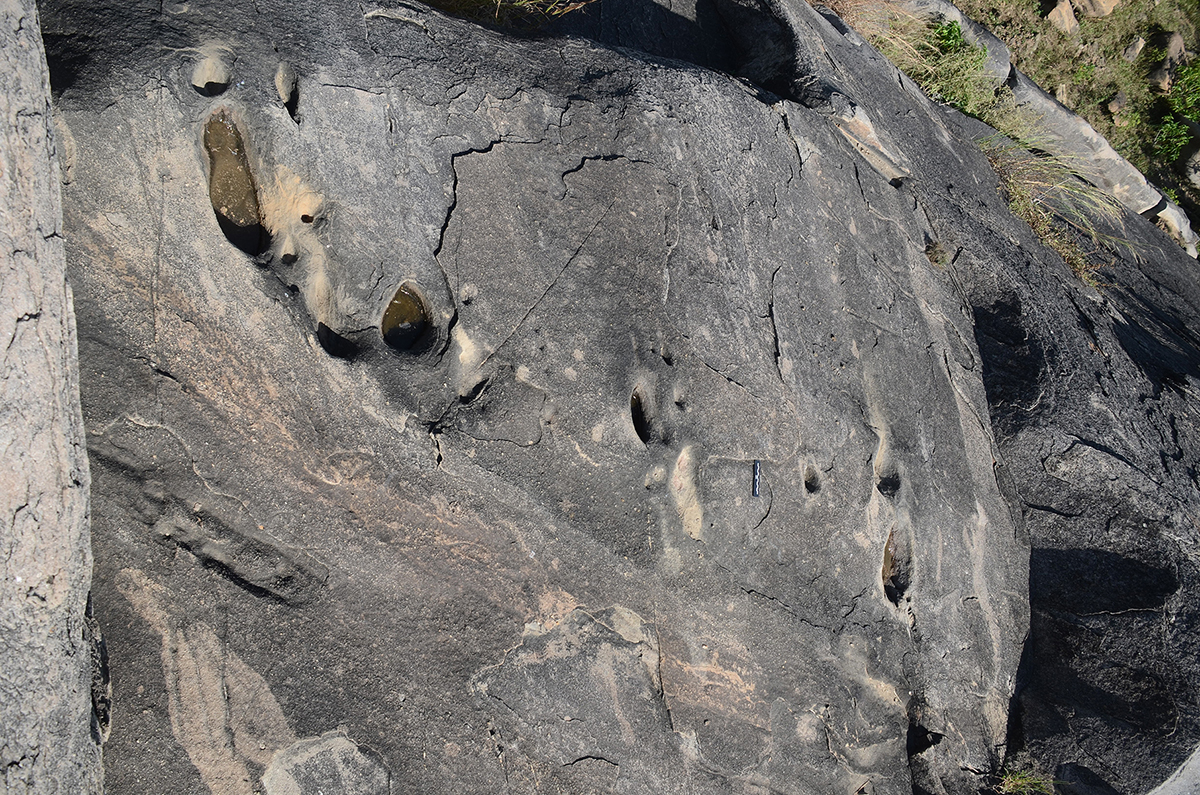 The smallest one is 1cm and the biggest one is 48cms and 10-11cms. All the pubic triangles were carved in the same direction (below). 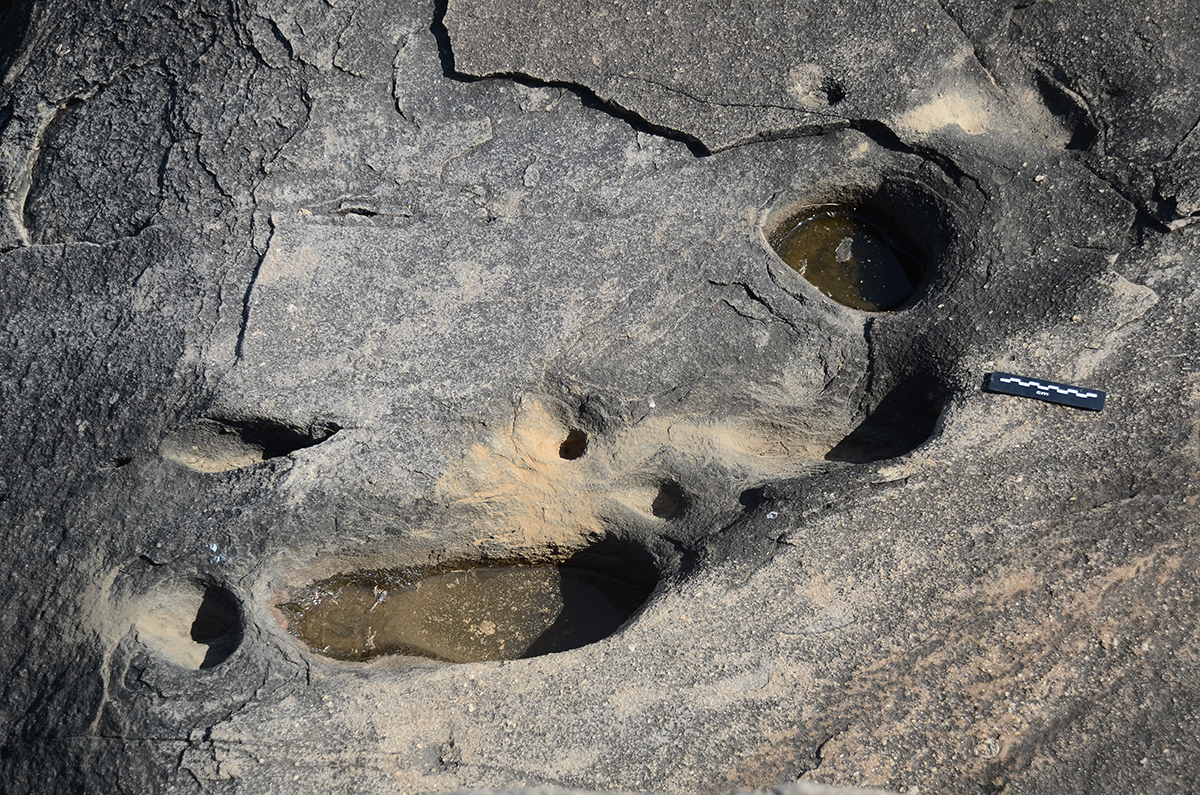 Mostly were carved in the same direction. Image: Meenakshi Dubey-Pathak

In some cases, a big size vulva contains 2-3 smaller vulvas inside. Some are engraved in the vertical rows (below). All the big holes are filled with water. 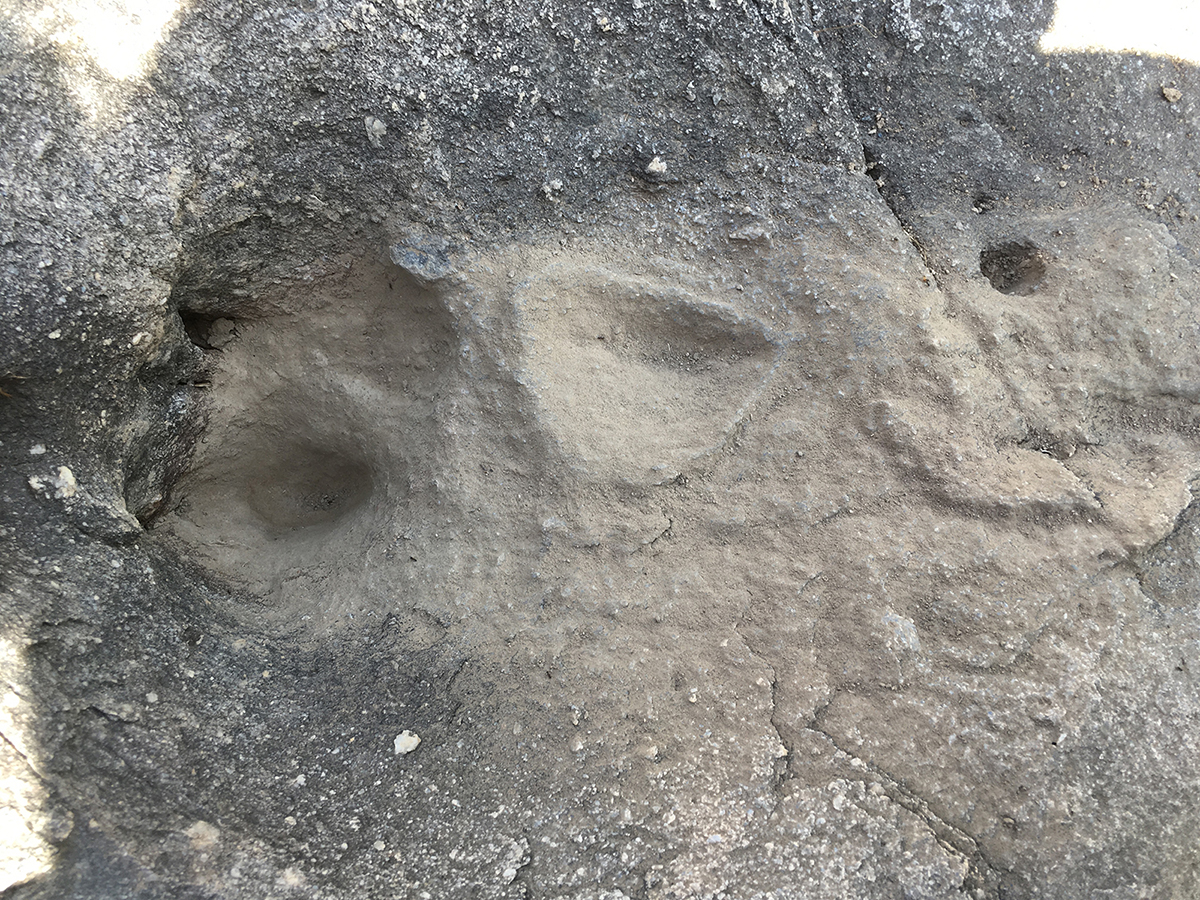 Some are engraved in a vertical row. Image: Meenakshi Dubey-Pathak

The opposite side wall of this big rock is facing south west and also has vulvas in different sizes (below). 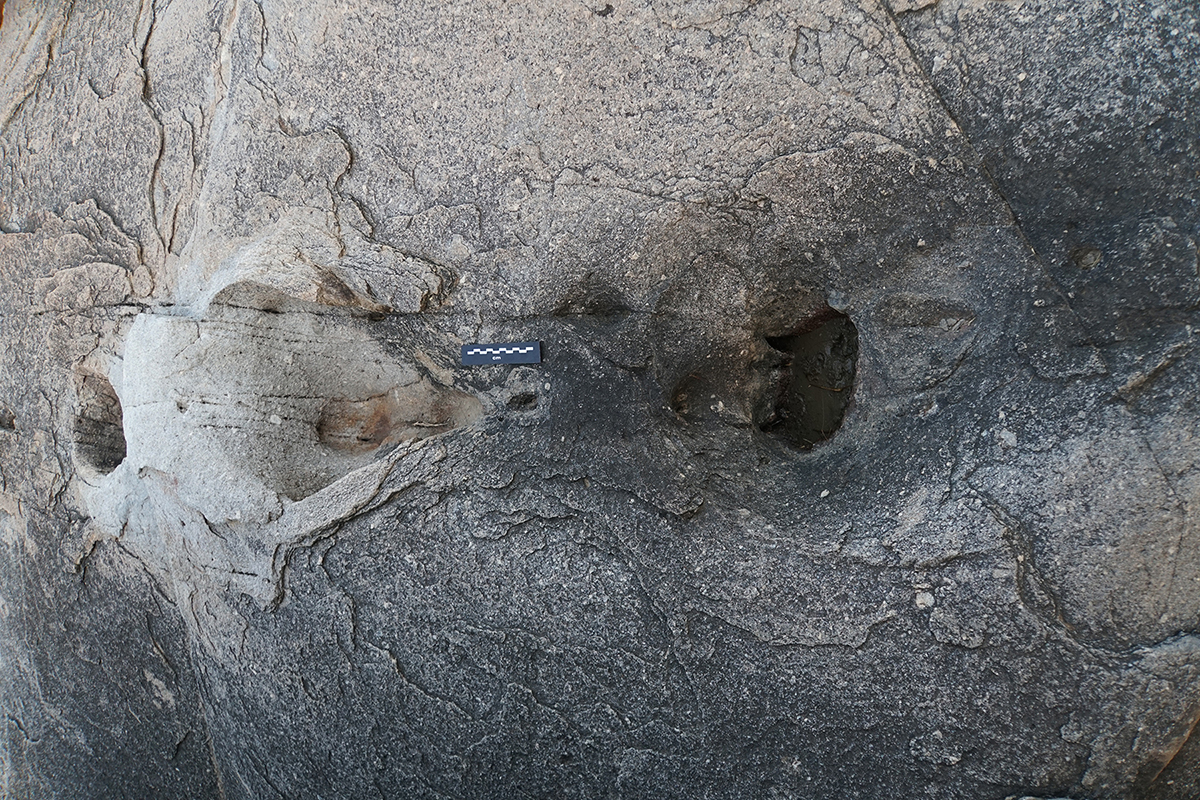 The opposite side wall of this big rock is facing south west and also has vulvas in different sizes. Image: Meenakshi Dubey-Pathak

Next to this rock on the lower side I noticed some deposits with pottery shards. After passing through we saw another connected rock with a small cavity that might hold a maximum of two people after crawling there. I saw some sacred vermillion marks (below) on the floor and ceiling. That indicates the importance of that place. A couple of cup marks were carved on the floor of this small cave and some pottery shards were also there. It shows the importance of that particular place. For sure people came to worship the place or maybe it was a secret place to perform magical rituals and could be related with fertility and puberty ceremonies in the past. As per the local villagers a couple of decades back it was occupied by a monk who used to perform rituals here. 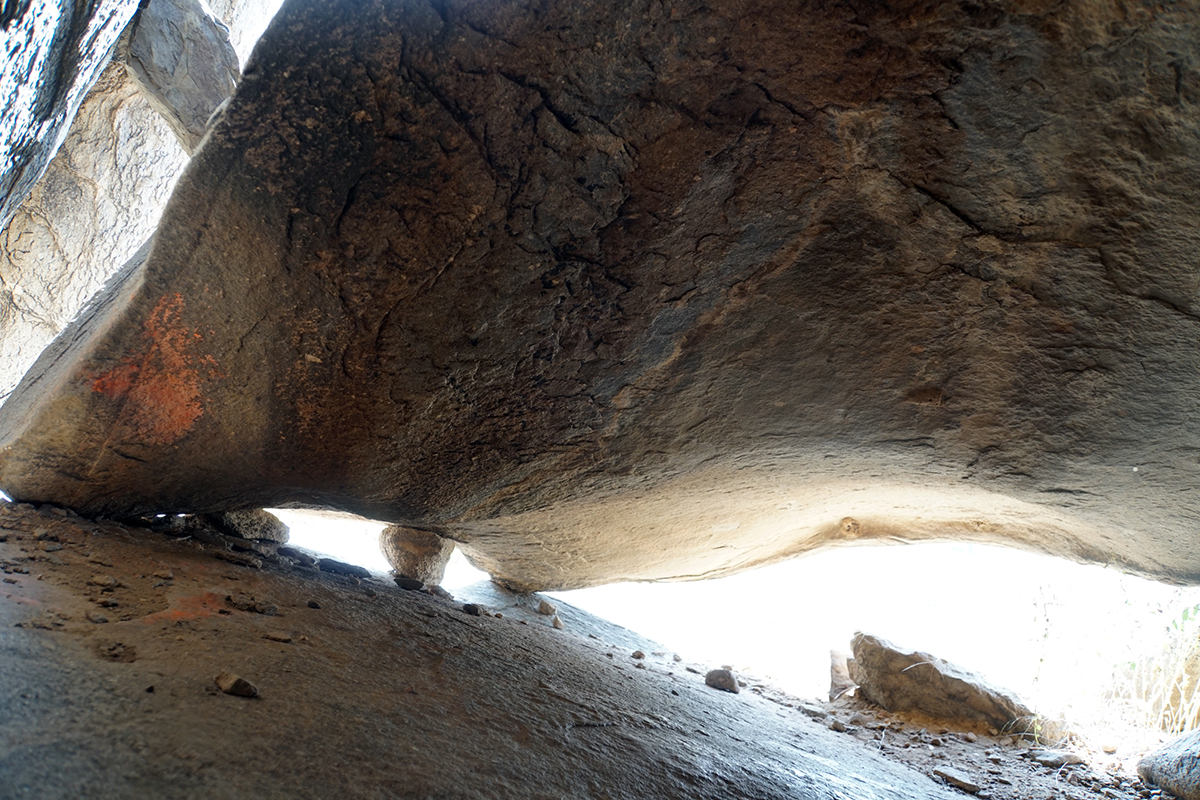 Next to it we saw another small cave with a small pond in oval shape, like a bathtub, 6 feet long and full of water but not so deep. Along it some more oval shaped water holes. These holes are filled with water nearly throughout the year, only in summers water level gets down. Some natural water bodies are already there.

Local ethnic communities are Gurjar or Gujjar, an ethnic agricultural and pastoral community. Although traditionally they have been involved in agriculture. Another tribe is Minas that claim connection to the ancient Matsya Kingdom which flourished in the 6th century B.C.

An old man from the Gurjar community told us that 400-500 years back their ancestors used to worship the Goddess Kali and Sidhbaba near those boulders. But now they have made a small temple. They don?t climb those boulders any more.

I am thankful to Mr Luv Shekhawat, Abhimanyu and Kushagra for helping me to explore the sites.