An article by Carol Off on As It Happens, cbc.ca - Archeologists struggle to repair vandals' damage to ancient petroglyphs in Texas - reports on work being carried out on vandalized rock art in Texas. 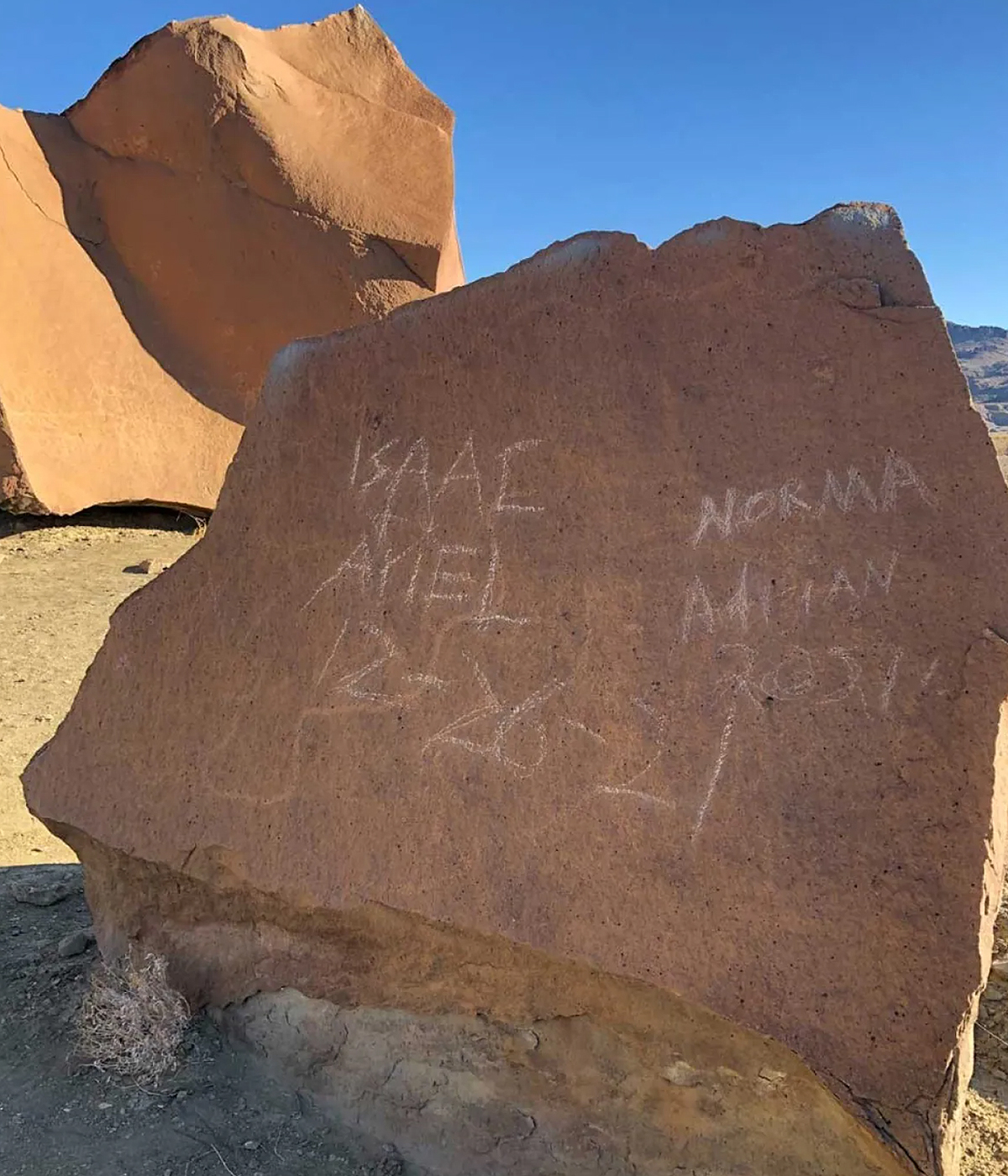 Vandals scratched four names into this 30-million-year-old rock, obscuring rock etchings that are estimated to be up to 8,000 years old in December 2021. (Big Bend National Park Service)

Petroglyphs, or rock carvings, that were etched into a Texas desert rock thousands of years ago were damaged and obscured by vandals who scratched names and dates into the rock face, according to Big Bend National Park officials.

Park staff are searching for whoever defaced the ancient swirls of rock art in the Indian Head area of Big Bend National Park on Dec. 26 in southwest Texas.

It's a personal blow for Tom VandenBerg, chief ranger for the park's interpretation and visitor services division.

VandenBerg said graffiti in the park, which saw record visitation numbers in the past year, isn't new, but irreparably damaging archaic rock etchings makes no sense.

"What we typically see in a national park is people scratching their name on a picnic table or a park sign or something like that. But when they do it right over the top of pretty pronounced rock art, that's difficult for those of us that have dedicated our careers to taking care of these places," VandenBerg told As It Happens host Carol Off.

"We're taking care of these places ... Help us in that mission. You know, these are very, very special places," said VandenBerg.

It's part of a growing trend of damage to U.S. parks as more people hit the trails, often driven by social media posts that signal where to find interesting spots.

At Big Bend, there have been about 50 graffiti or vandalism incidents in the past five years as park visitations doubled.

The search for the Big Bend park vandals started with Isaac, Ariel, Norma and Adrian. The four names were scratched into the 30-million year old reddish rock, alongside the date Dec. 26, 2021.

Leads have been pouring in on the suspects, since the park service released the information.

The scrawled names obscure a wavy line, etched in the rock an estimated 4,000 to 8,500 years ago during the Archaic Peroiod. This was a 7,500-year time period where Native American communities hunted small game with an atlatl or small spear. The rock etching that was marred is an example of pre-contact Native American art.

Anthropologist Jan Simek of the University of Tennessee called the vandalism "disturbing" and "selfish."

"The artwork is sacred and beautiful, and its destruction permanently removes ancient and meaningful aspects of our homeland... desecration indicates that the perpetrators have no respect for the original inhabitants of our country," Simek said in an email to CBC Radio.

Big Bend National Park was acquired by the U.S. government, and opened in 1944. It's a prime example of the Chihuahuan Desert in a spot with 13,000 years of human history, southeast of El Paso, near the Mexican border.

Rock art restoration experts say graffiti has seen a dramatic rise since the 1990s. Johannes (Jannie) Loubser, an archeologist and rock art specialist based in Georgia, is often called in to parks or heritage sites to painstakingly fix rock.

"It all depends on the depth of the scratch. This case was not deep, judging from the photographs. chalk-like rock dust brushed and poulticed away, leaving a relatively unblemished surface," said Loubser.

But, he says, even if not as visible, the damage will remain.

He advises keeping cars and foot trails away from rock art, or adding signage or protections, to help prevent damage.

The damage done to rock art is expensive to try to fix. It is also illegal. Damaging a park resource is a federal violation that can lead to an up to $5,000 fine or jail time. Damaging ancient cultural sites is a violation of the Archaeological Resources Protection Act (ARPA).

Jannie Loubser is a member of the Rock Art Network