Oldest known work of portable prehistoric art in the Americas, a walking mammoth carved on to a fossil bone, recently discovered in Florida. In a report by Sandra Rawls, correspondent for the Vero Beach 32963 , a leading Florida anthropologist is claiming "the oldest, most spectacular and rare work of art in the America" discovered by an amateur Vero Beach fossil hunter - an ancient bone etched with a clear image of a walking mammoth or mastodon. 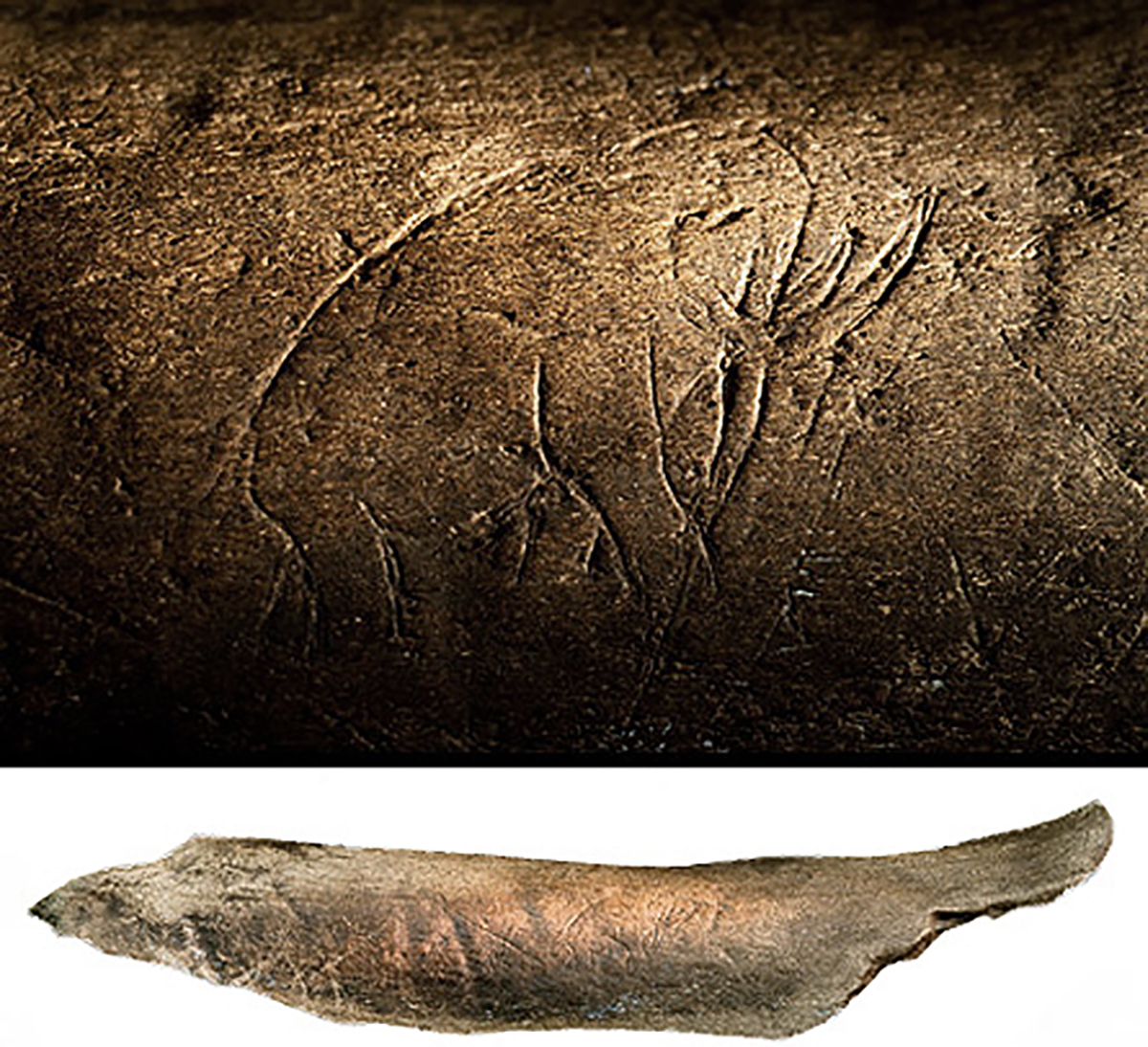 'According to leading experts from the University of Florida, the remarkable find demonstrates with new and startling certainty that humans coexisted with prehistoric animals more than 12,000 years ago in this fossil- rich region of the state. No similar carved figure has ever been authenticated in the United States, or anywhere in this hemisphere.

'The brown, mineral-hardened bone bearing the unique carving is a foot-long fragment from a larger bone that belonged to an extinct mammoth, mastodon or ground sloth according to Dr. Richard C. Hulbert, a vertebrate palaeontologist at the Florida Museum of Natural History museum. These animals have been extinct in Florida for at least 10,000 years.

'Etched into the bone by a highly sharpened stone tool or the tooth of the animal is the clear image of a walking adult mammoth or mastodon. Extensive tests over the past two months have shown that the image was created when the bone was fresh, presumably right after the animal it belonged to was killed or died.

'Experts who have examined the bone, found at a location which has not been publicly disclosed on the northern side of Vero Beach, concluded the carving and surface are of the same age - 12,000 to 14,000 years old - with no evidence of recent tampering.

'Dr. Barbara Purdy, professor emerita of Anthropology at the University of Florida, on May 19th told Vero Beach 32963 the discovery of an image carved into a bone by a prehistoric human is unprecedented in North America, and she called the find by fossil hunter James Kennedy "the oldest, most spectacular, and rare work of art in the Americas."

"Never before in the Western Hemisphere, has there been a bone from an extinct species incised with a recognizable picture of an animal," Purdy went on. "It would be ancient evidence that people living in the Americas during the last Ice Age created artistic images of the animals they hunted."

'The four-inch etching of the elephant appears faintly but clearly on the surface of a fossil bone. The image, small yet showing the perspective of one rear leg in front of the other, a dangling trunk and a hint of a squinting eye, was apparently made by a prehistoric resident of south central Florida.

'In Britain, Dr. Paul G. Bahn, an archaeologist with a doctoral degree from the University of Cambridge, is a specialist in prehistoric art; he led the team that discovered the first Ice Age cave art in Britain in 2003 and 2004. Purdy included him in the loop of information on the Vero bone, and shared his reaction with Vero Beach 32963 as well.

'It shows the requisite scientific skepticism of finds as rare as this, and at the same time, his optimism that an amazing discovery has indeed been made in Vero Beach. "When you see something like this, your first thought is that it must be a fake. But there has to be a first time, and this might be it."

'Using a method called energy dispersive X-Ray spectroscopy and a scanning electron microscope, they were able to study the object in tremendous detail. All three scientists concluded that both the carving and the bone's surface were the same age, with no evidence of recent tampering.

'When bones become fossilized, calcium is slowly replaced by minerals including rare earth elements like scandium and cerium. Bone takes up these rare earth elements, or REEs, in direct proportion to the amount present in the particular strata of earth where the bone was originally located.

'This gives the bone a unique REE signature that confirms the earth layer where a bone originally lay and gives an idea of its age. Scientists can then compare the results to those of others fossil bones found in similar settings in Vero Beach.