An article on phys.org - Footprint found in Chile is 'oldest' in Americas - reports on the recent analysis by scientists in Chile of a footprint dating from at least 15,600 years ago, making it the earliest such sign of human presence in the Americas. 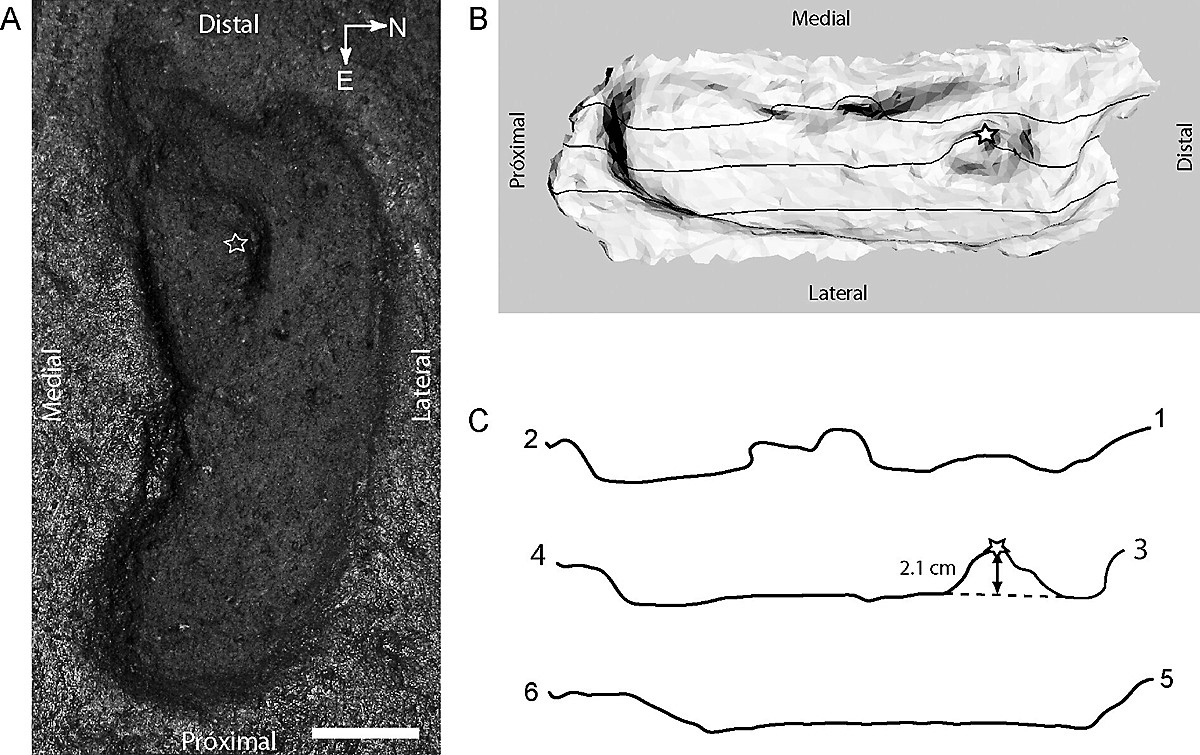 A) Photography of the original sedimentary structure attributed to a human footprint that was excavated at the Pilauco site. A sediment lump is apparently embedded within the trackbed (star). Scale bar 5 cm. B) Three-dimensional model in dorsal view with a virtual 45 degree tilt toward the south to facilitate the observation of profile lines 1-2, 3-4 and 5-6 drawn on the 3D model surface (123Catch from Autodesk and trial version of Rhino4, McNeel &Associates). C) Profile lines: crossing from the 'heel', 'medial longitudinal arch' and 'hallux'; passing by the midline. Notice that the sediment lump is 2.1 cm high from the footprint base; and line passing through the 'heel', 'lateral longitudinal arch' and 'lateral digits'. Credit: PLOS ONE (2019)

The footprint was found at the Pilauco excavation in the city of Osorno, south of Santiago, where scientists have been digging since 2007. Archeologists from the Austral University of Chile said the footprint was first spotted in 2011 but it has not been until recently that paleontologist Karen Moreno and geologist Mario Pino have been able to confirm that the print is human, and that it is the oldest in the Americas yet known. This was carried out by applying radiocarbon dating techniques to organic plant material where the print was found.

Pino explained the footprint appears to be that of a barefoot man weighing about 70 kilograms and of the species Hominipes modernus, a relative of Homo sapiens.

The area in Chile has proven rich in fossils, including evidence of an ancestor of today's elephants and horses, as well as of more recent human presence.

The newer findings were published in the latest edition of the peer-reviewed scientific journal PLOS One:

The present study describes the discovery of a singular sedimentary structure corresponding to an ichnite that was excavated at the paleo-archaeological site Pilauco (Osorno, Chile). The trace fossil is associated with megafauna bones, plant material and unifacial lithic tools. Here we present a detailed analysis of the Pilauco ichnite and associated sedimentary structures, as well as new radiocarbon data. The ichnological analysis confidently assigns the trace to the ichnospecies Hominipes modernus a hominoid footprint usually related to Homo sapiens. Some particular characteristics of the Pilauco trace include an elongated distal hallux, lateral digit impressions obliterated by the collapsed sediment, and sediment lumps inside and around the trace. In order to evaluate the origin of the ichnite, trackmaking experiments are performed on re-hydrated fossil bed sediments. The results demonstrate that a human agent could easily generate a footprint morphology equivalent to the sedimentary structure when walking on a saturated substrate. Based on the evidence, we conclude that the trackmaker might well have been a bare-footed adult human. This finding, along with the presence of lithic artifacts in the same sedimentary levels, might represent further evidence for a pre-Clovis South American colonization of northern Patagonia, as originally proposed for the nearby Monte Verde site.