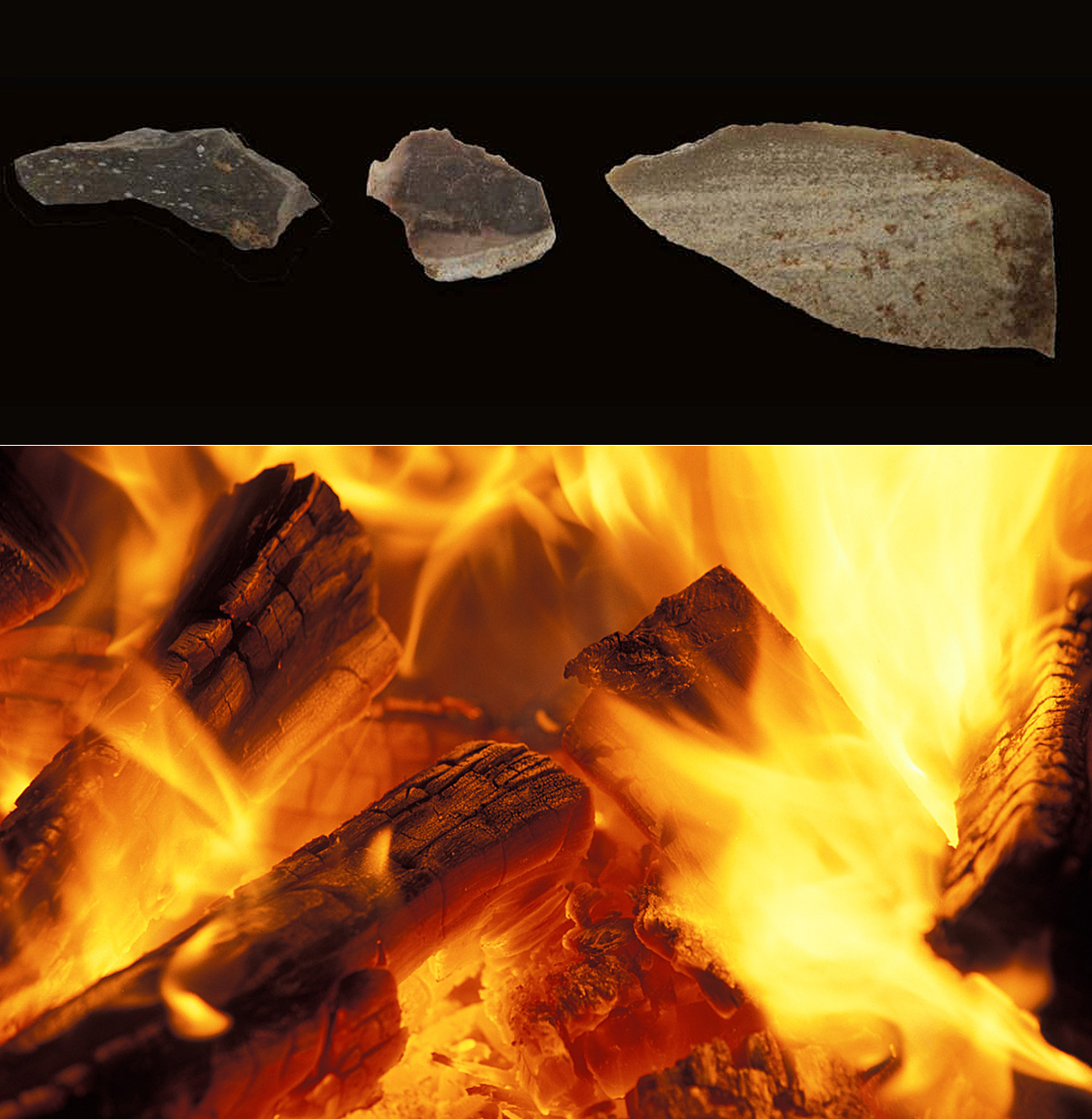 Hominins used controlled fire to make tools 300,000 years ago. Artefacts (left to right): a pot-lid, a flake and a blade. Each was produced at a different temperature. Image: Weizmann Institute of Science, Israel.

A new analysis of 300,000-year-old stone tools discovered in a cave in Israel suggests that hominins in the Levantine region used fire at controlled temperatures to make tools, according to a paper published in Nature Human Behaviour (see below).

The tools, which were found in the Qesem Cave in central Israel, consisted of flint blades that were heated to a lower temperature (259°C) than flakes (413°C) or pot lids (447°C). The researchers replicated the heating conditions and found that they could make better blades by controlling the temperature, suggesting that our ancestors may have purposefully heated materials to different temperatures in order to enhance their tools.

The use of fire to treat raw materials was an important discovery made by early hominins. Previous research reported evidence of systematic flint tool production by hominins in the Levant during the Late Lower Palaeolithic (420,000 to 200,000 years ago), and the presence of burned flint artefacts indicated that tools were exposed to fire in some way. However, it was unknown whether the exposure to fire was random or the inhabitants had control over the fire to create specific tools.

The Qesem Cave in central Israel is a key Levantine site during the Late Lower Palaeolithic era and has yielded many significant finds, including the extensive and habitual use of fire and intensive blade production. Aviad Agam, Filipe Natalio and colleagues examined two types of flint tools with evidence of fire exposure found in this cave. They used a combination of spectroscopy and machine learning to estimate the temperature at which the artefacts were burned. They found that blades were heated to a lower temperature (259°C) than flakes (413°C), and that pot lids from the same cave were exposed to an even higher temperature (447°C). The authors then performed an experiment to replicate similar heat conditions and found that controlling the heat levels of flint can improve blade production.

The authors conclude that Levantine hominins may have purposefully heated materials to different temperatures in order to enhance the production of tools.

Production of stone artefacts using pyro-technology is known from the Middle and Upper Palaeolithic of Europe and the Levant, and the Middle Stone Age in Africa. However, determination of temperatures to which flint artefacts were exposed is impeded by the chemical and structural variability of flint. Here we combine Raman spectroscopy and machine learning to build temperature-estimation models to infer the degree of pyro-technological control effected by inhabitants of the late Lower Palaeolithic (Acheulo-Yabrudian) site of Qesem Cave, Israel. Temperature estimation shows that blades were heated at lower median temperatures (259 °C) compared to flakes (413 °C), whereas heat-induced structural flint damage (for example, pot-lids and microcracks) appears at 447 °C. These results are consistent with a differential behaviour for selective tool production that can be viewed as part of a plethora of innovative and adaptive behaviours of Levantine hominins >300,000 years ago.