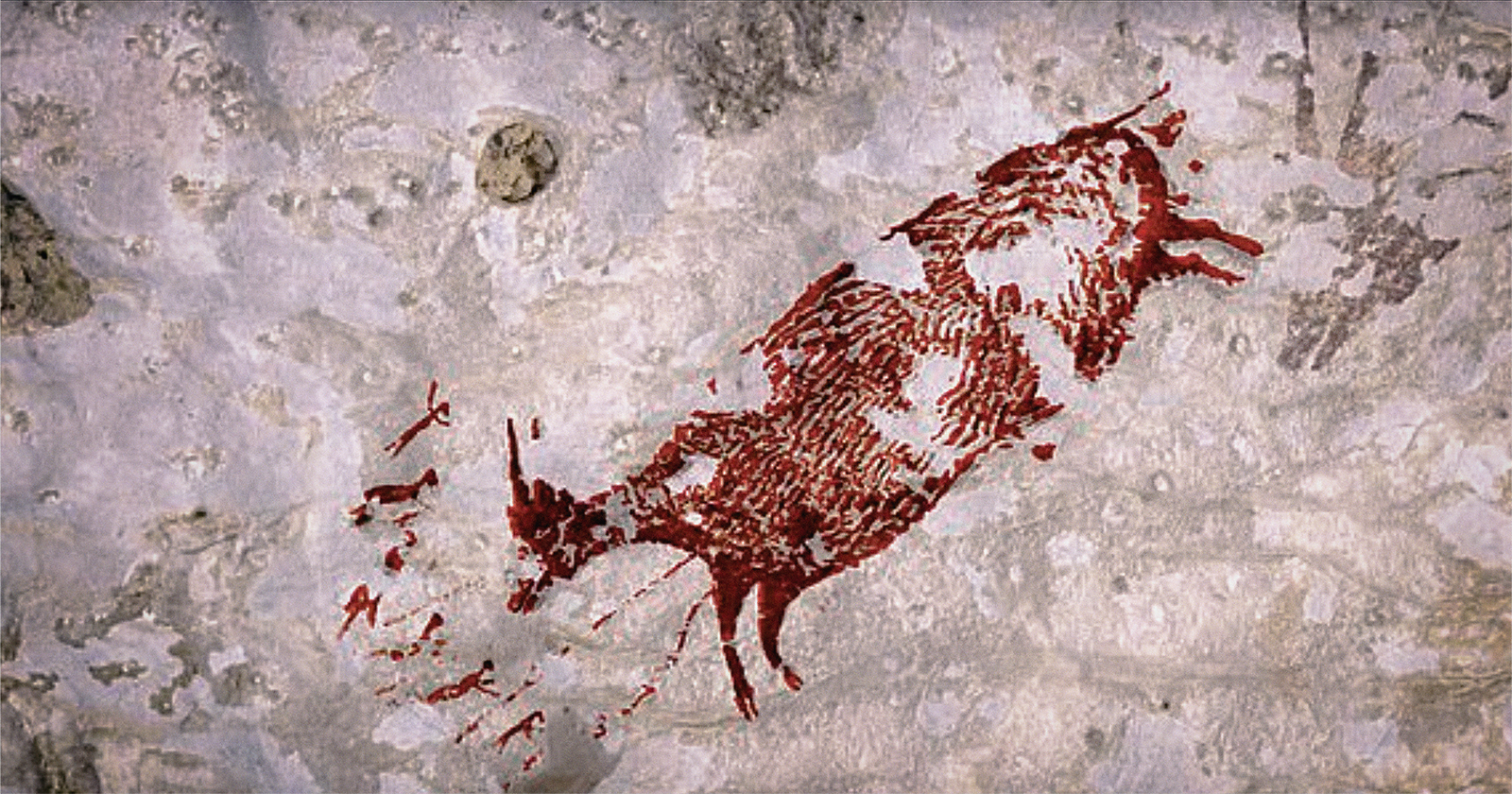 The cave art, depicting human-animal hybrid figures hunting warty pigs and dwarf buffaloes has been dated to nearly 44,000 years old. It is nearly twice as old as any previous hunting scene and provides unprecedented insights into the earliest storytelling and the emergence of modern human cognition.

Adam Brumm, an archaeologist at the Australian Research Centre for Human Evolution at Griffith University, states that “We were stunned by the implications of this image. This was just mind-boggling because this showed us that this was possibly the oldest rock art anywhere on the face of this planet.”

The painting, discovered in 2017, is one of hundreds in South Sulawesi, including a red hand stencil, which was dated to at least 40,000 years ago. But the latest finding is exceptional as it is more than twice as old as any previously known narrative scenes and hints at ancient myths and an early capacity for imagination.

The 4.5-metre-wide panel shows six fleeing mammals – two Sulawesi warty pigs and four dwarf buffaloes, known as anoas, small but fierce animals that still inhabit the island’s dwindling forests. The animals are being pursued by human-like figures with some animal features (therianthropes), who seem to be wielding long swords or ropes. Their bodies are human-shaped but one appears to have the head of a bird and another has a tail. Human-animal hybrids occur in the folklore of almost every modern society and are frequently cast as gods, spirits or ancestral beings in religions across the world.

Prof Maxime Aubert, an archaeologist at Australia’s Griffith University, explains that “the most fascinating aspect is it has all the key elements of modern human cognition. Hand stencils, a narrative scene, human-like figures that were conceived of something that doesn’t really exist in the real world. Everything is there by 44,000 years ago.”

The cave is in a well-explored system, which researchers had visited frequently over the past decade. The rock art discovery was made after an expedition member noticed what appeared to be an entrance to a high level chamber above and climbed up a fig tree to investigate.

Rock art is difficult to date, and the scientists relied on analysing mineral growths known as cave popcorn, that had formed over the painting. Measuring the radioactive decay of uranium and other elements in the deposits gave dates ranging from 35,100 to 43,900 years as a minimum age for the Sulawesi discovery. The findings are described in the journal Nature.

Brumm adds that “It’s just amazing and to me it just shows how much more rock art that is out there waiting to be discovered that completely changes our understanding of the human story.”