An article by Nicholas St. Fleur on nytimes.com - This Mysterious Ancient Structure Was Made of Mammoth Bones - reports on the circular structure made from the skulls, skeletons and tusks of more than 60 woolly mammoths carried out by Ice Age hunter-gatherers. The ring of skulls, skeletons, tusks and other bones was too large for a roof, scientists say. So what was it for? 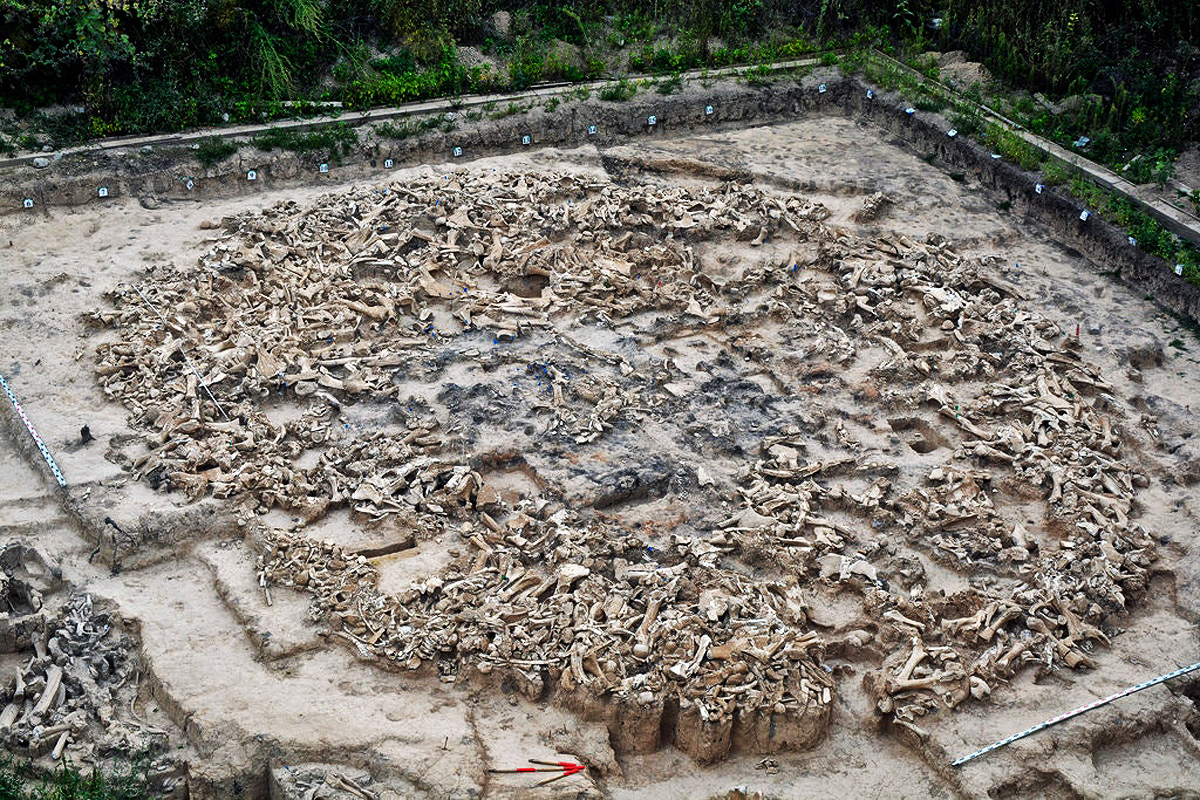 Ice Age hunter-gatherers in the steppes of what today is Russia carried out a remarkable construction project: a 40-foot-wide, circular structure made from the skeletons and tusks of more than 60 woolly mammoths. The reason remains a mystery to archaeologists.

Alexander Pryor, an archaeologist at the University of Exeter in England, explains that “The sheer number of bones that our Paleolithic ancestors had sourced from somewhere and brought to this particular location to build this monument is really quite staggering. It does boggle my mind.”

Layers of rock showing signs that fires were burned at the site. One hypothesis was that burning greasy mammoth bones aided hunter-gatherers as they tried to strip meat off the mammoths before wolves and foxes arrived to try to seize the haul. Image: A.J.E. Pryor

Alexander Dudin, a researcher from the Kostenki Museum-Preserve, and a team of scientists began excavating the 25,000-year-old mammoth-bone circle in 2014 at a site called Kostenki 11, which is 300 miles south of Moscow. It is the third structure uncovered at the site. The discovery was published Monday in the journal Antiquity.

The majority of the bones (pictured left) found at the site in the Russian Plains are from mammoths. Image: University of Exeter. Archaeological examination (right) of the site. Image: A.E. Dudin

Archaeologists have unearthed about 70 mammoth-bone structures across Eastern Europe. But this one is the oldest on the Russian plain thought to be made by modern humans. Most of the previously identified structures were small, leading researchers to conclude they were most likely used as winter dwellings on a nearly treeless landscape.

However the researchers state that this circle was too large for a roof, which might suggest it was used for a different purpose. David Beresford-Jones, an environmental archaeologist at the University of Cambridge and an author on the paper, explains that “There are more than 60 mammoths in this one structure. It doesn’t make much sense, really, as a house.” The team suggested that the hunter-gatherers instead might have butchered massive mammoth carcasses at the site and then stored the meat and fat in nearby permafrost as if in an ancient refrigerator.

Dr. Pryor arrived at Kostenki 11 in 2015 and quickly went shoeless, tiptoeing so that he wouldn’t crush any of the hundreds of mammoth bones scattered around the site. The ring, which also included ribs, jaws and leg bones, had probably been piled 20 inches high before collapsing thousands of years ago.