An article by Jens Notroff & Oliver Dietrich on the American Schools of Oriental Research (ASOR) - Göbekli Tepe: Neolithic Gathering and Feasting at the Beginning of Food Production - reports on the ongoing research at Göbekli Tepe and the light it sheds on the emergence of agriculture and animal husbandry, and the onset of food production and the Neolithic way of life. 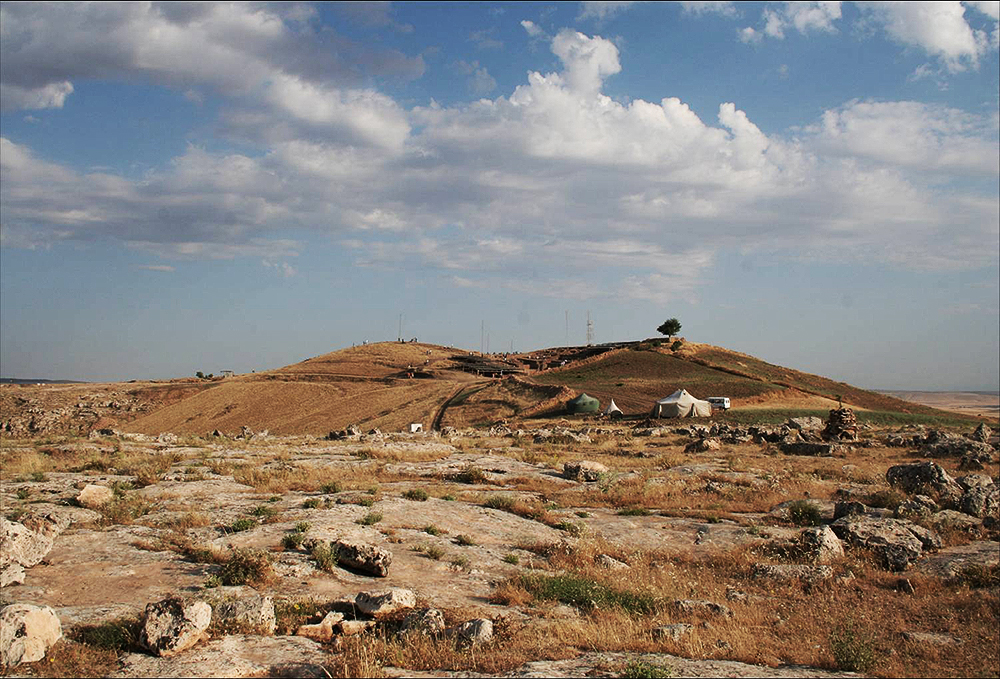 The mound of Göbekli Tepe seen from the south. Image: K. Schmidt, DAI

South-eastern Turkey - the tell of Göbekli Tepe, situated on the highest point of the otherwise barren Germuş mountain range. This man-made mound rises 15 metres in height and covers about 9 hectares. It is the earliest known monumental cult architecture in the ancient Near East. It was constructed by hunter-gatherers soon after the end of the last Ice Age. It was intentionally buried it about 10,000 years ago.

Göbekli Tepe has been known to archaeologists since the 1960's, when a joint survey team from the Universities of Istanbul and Chicago under the direction of Halet Çambel and Robert Braidwood observed numerous flint artefacts littering the surface of the mound. However, the monumental architecture remained undetected, and was eventually discovered by Klaus Schmidt on a grand tour of important south-eastern Turkish Neolithic sites in 1994. He noticed the large limestone blocks, reminding him of another nearby Neolithic site - Nevalı Çori - where he had worked several years before. Excavations at this site began the next year. 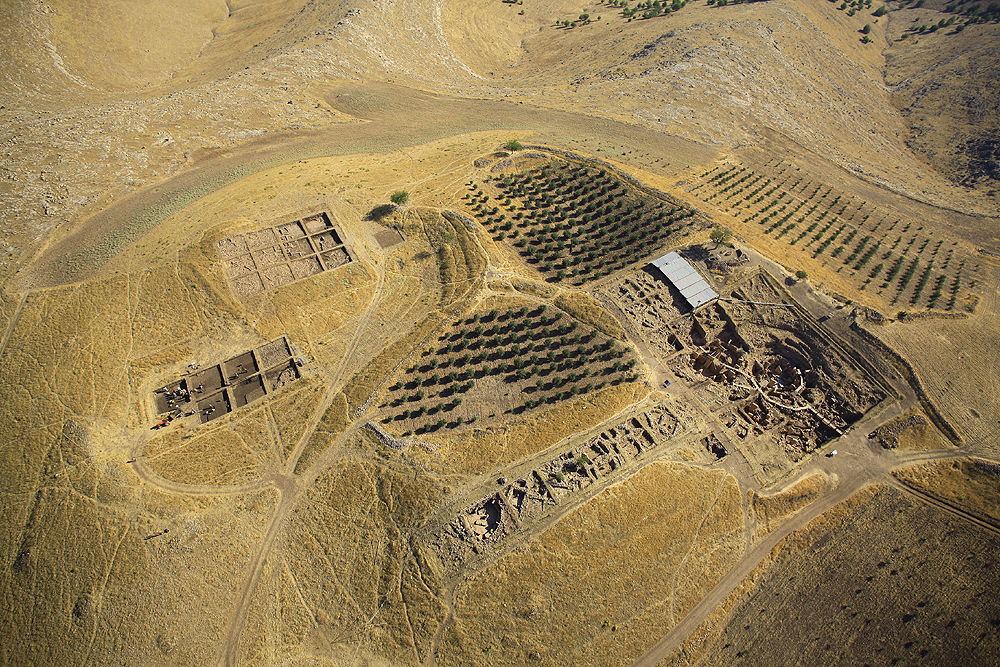 In about 22 years of ongoing fieldwork, the German Archaeological Institute and the Şanlıurfa Museum Museum have revealed a totally unexpected monumental architecture at Göbekli Tepe, dating to the earliest Neolithic period. No typical domestic structures have yet been found, leading to the interpretation of Göbekli Tepe as a ritual centre for gathering and feasting. The people creating these megalithic monuments were still highly mobile hunter-foragers and the site's material culture corroborates this: substantial amounts of bones exclusively from hunted wild animals, and a stone tool inventory comprising a wide range of projectile points. Osteological investigations and botanical studies show that animal husbandry was not practiced at Göbekli Tepe and domesticated plants were unknown.

Two colossal pillars - measuring about 5.5 m, on shallow pedestals carved out of the carefully smoothed bedrock. This central pair of pillars is surrounded by a circle formed of similar, but slightly smaller pillars which are connected by stone walls and benches. 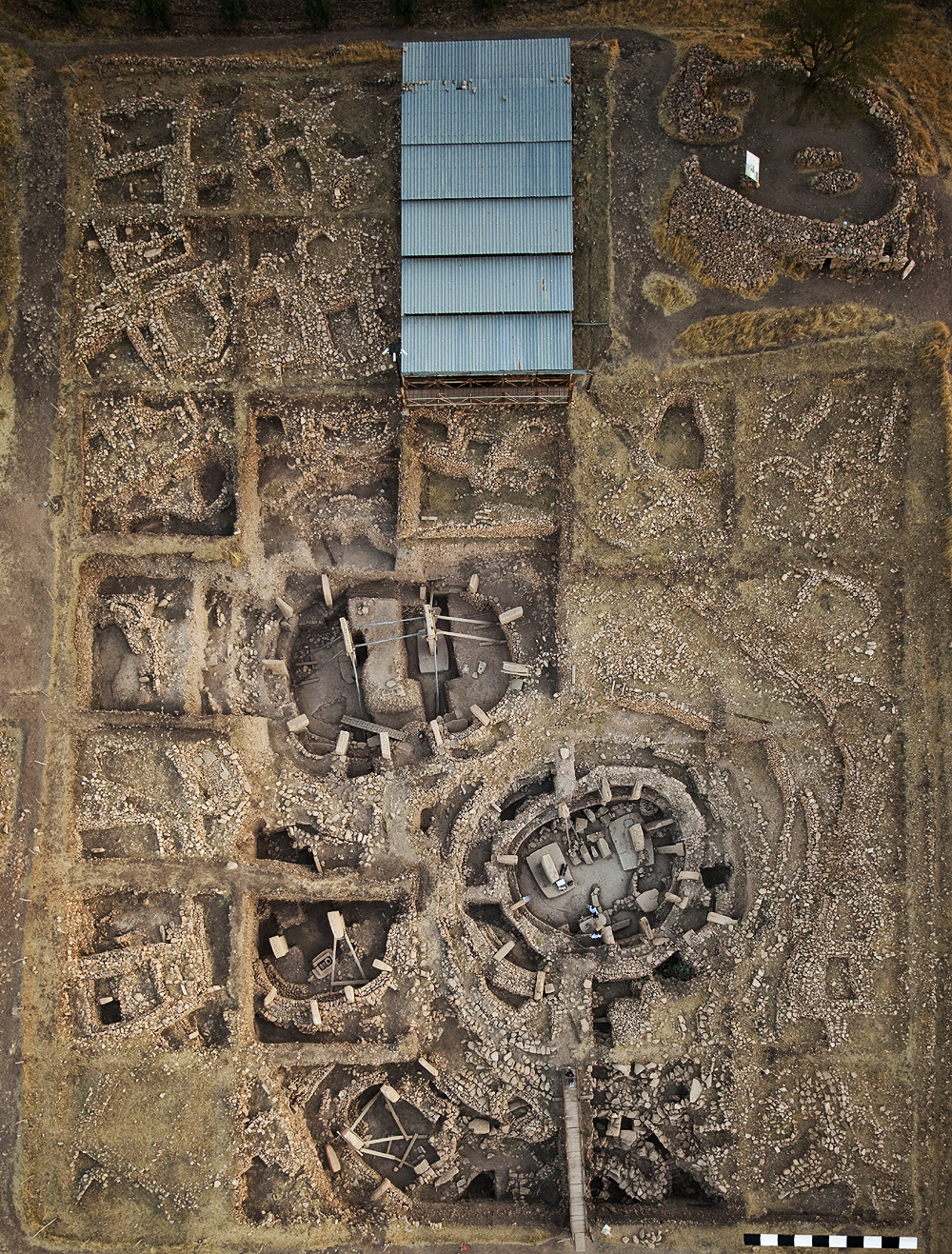 The surrounding pillars are decorated with depictions of animals such as foxes, aurochs, birds, snakes, and spiders. The central T-shaped pillars display a more anthropomorphic character: they clearly display arms depicted in relief on the pillars' shafts, with hands brought together above the abdomen, pointing to the middle of the waist. Belts and loincloths underline this impression and emphasize the human-like appearance of these pillars.

While naturalistic and abstract depictions find their most monumental manifestation on the T-shaped pillars, there are others. Similar and clearly related iconography also occurs on functional objects like so-called shaft straighteners, on stone bowls and cups, as well as on small stone tablets which apparently do not have any other function than to bear these signs. 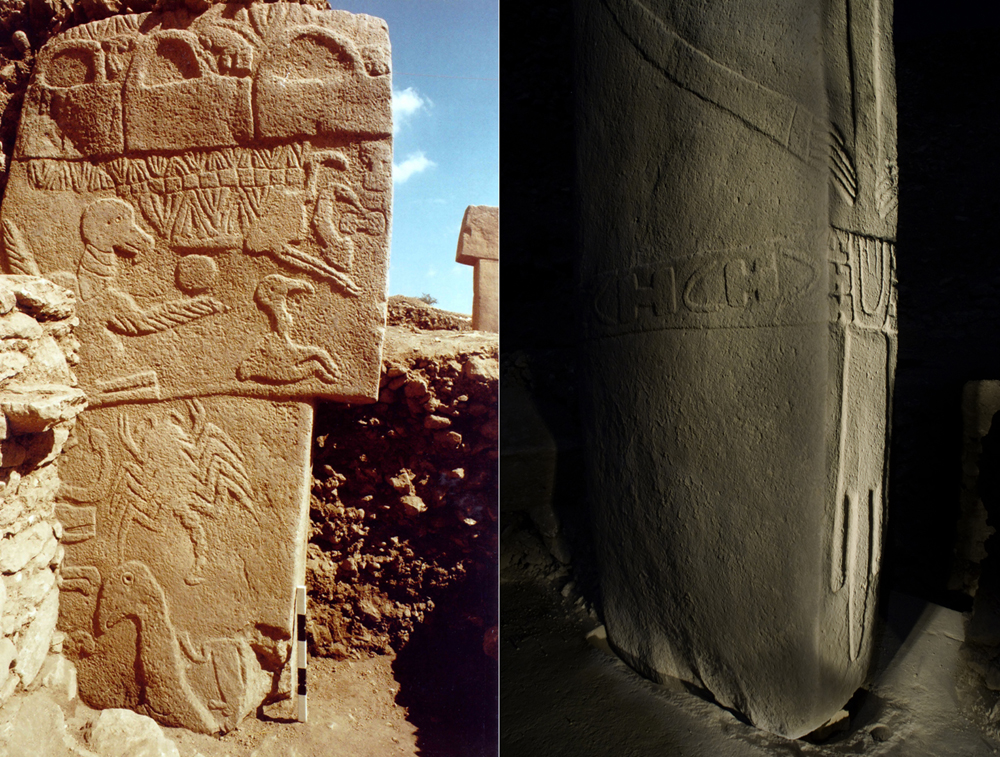 There are a few other sites with T-shaped pillars in the close vicinity; a spiritual concept seems to have linked these sites to each other, suggesting a larger cultic community among Pre-Pottery Neolithic (PPN - ca. 9,600-8,800 calBC) mobile groups in Upper Mesopotamia, tied in a network of communication and exchange.

Ethnologic and historic analogies emphasize the importance of regular gatherings and collective activities as means of maintaining social cohesion in hunter-gatherer communities. Gatherings also allowed for the exchange of information, goods, and marriage partners.

Such large-scale gatherings naturally need to be established in locations that are known and easily accessible for the participating groups - the topographical situation of Göbekli Tepe as a landmark overlooking the surrounding plains seems a perfectly suitable central space for these groups and people inhabiting the wider region.

Large communal tasks executed as collective work events, reflected in the apparently continuous construction activity at Göbekli Tepe, provided a unifying reason for people to come together; large workforces means lavish feasts. Evidence of flint artefacts, fragments of stone vessels, other ground stone tools, and in particular an impressively large numbers of animal bones - above all gazelle and aurochs - supports this.

Map showing location of Göbekli Tepe. 3D-model of Pillar 18, one of the central pillars of Enclosure D, illustrating the anthropomorphic character of the T-shaped pillars with the depiction of arms, hands, a belt and loincloth. Image: HS Karlsruhe

Repetitive feasting at Göbekli Tepe may have played an essential role not only in creating and strengthening social bonds among the individuals and groups meeting there, but must also have stressed the economic potential of these hunter-gatherers to repeatedly feed such large crowds.

Consequently, new food resources and processing techniques may have been explored, subsequently paving the way for a complete change in subsistence strategy. This suggests that the early appearance of monumental religious architecture, and all that involves, led to the emergence of agriculture and animal husbandry, and the onset of food production and the Neolithic way of life.

Jens Notroff and Oliver Dietrich are research assistants in the Göbekli Tepe project of the German Archaeological Institute (DAI), excavations at Göbekli Tepe are carried out in close cooperation with the Şanlıurfa Haleplibahçe Museum. Archaeobiological research is conducted by the Institute of Palaeoanatomy, Domestication Research and the History of Veterinary Medicine, Ludwig-Maximilians-University, Munich. The project is funded by the DAI and the German Research Foundation (DFG).

Read more:
Ritual use of skulls at Gobekli Tepe