In an extract from a new book on spectator.co.uk - Antony Gormley on why sculpture is far superior to painting - the artist tells Martin Gayford why painting will always be a secondary artform. 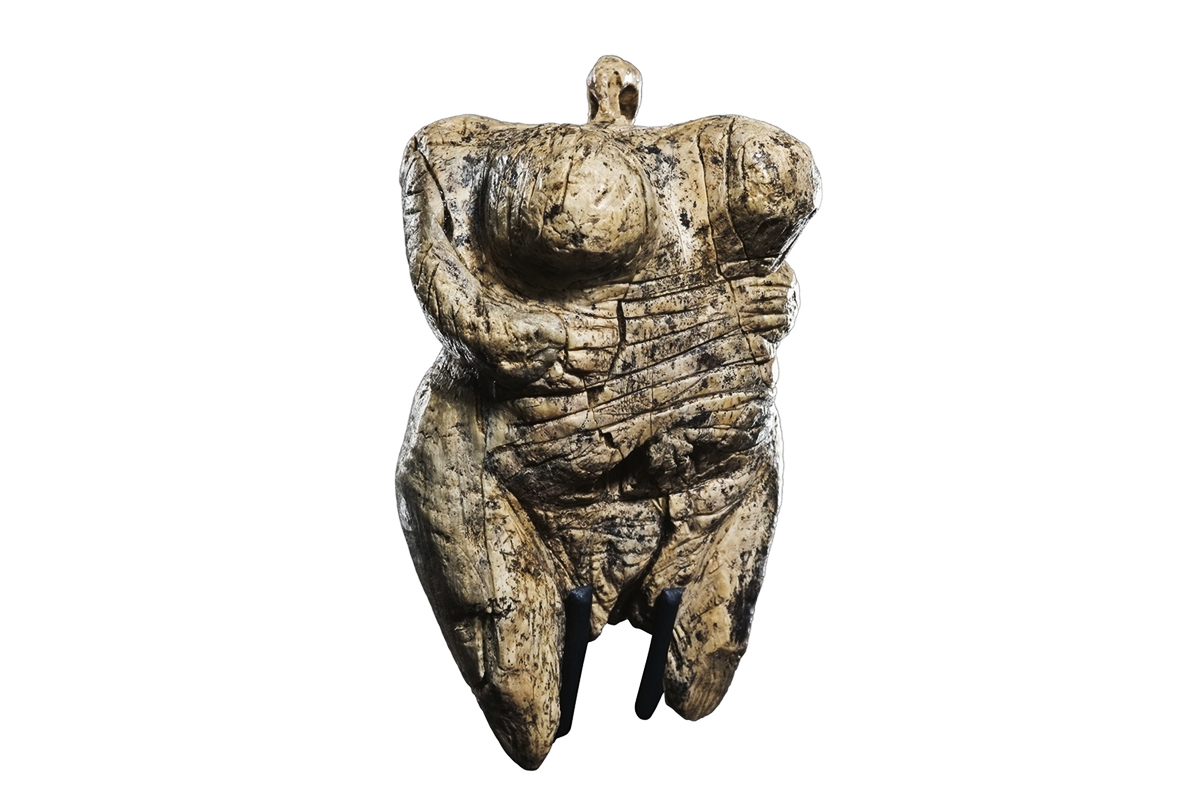 The Hohle Fels figurine, an Upper Paleolithic figurine made of mammoth ivory unearthed in 2008 in Hohle Fels, a cave near Schelklingen, Germany. It is dated to between 40,000 and 35,000 years ago. Image: Archäologisches Landesmuseum Baden-Württemberg.

Antony Gormley: In the beginning was the thing! The reason I chose sculpture as a vocation was to escape words, to communicate in a physical way. It was a means of confronting the way things were, of getting to know them in material terms.

The origins of making physical objects go back to before the advent of Homo sapiens, earlier even than the appearance of our Neanderthal cousins. Sculpture emerges from material culture. At the beginning there was an urge to make objects and you could argue that making them was the catalyst for the emergence of the modern mind.

Martin Gayford: The earliest sculpture so far discovered is often held to be a little figure that is an amalgam of an animal and a man’s body: two easily recognisable items stuck together; you might say this is a three-dimensional collage. It’s called the ‘Löwenmensch’ or ‘Lion Man’ (though some have wondered if it’s actually a cave bear, or female, a lioness-woman). Homo erectus made beautiful axes and many early hominoids collected stones with shapes that reminded them of animals or faces. But as far as we know only Homo sapiens made images of things that don’t exist: a person with the head of a lion or a bull with wings.

AG: At Blombos Cave in South Africa in 2008 archaeologists found pieces of ochre, an iron-rich mineral, which had been deliberately incised with lines. They were in a layer dated to around 75,000 BCE. There were abalone seashells used as palettes, and also many types of ochre pigment, bits of ochre that have been rubbed. The site has been described as a pigment-processing workshop.

This yellow colour was evidently very important to the people who used this place. Blombos Cave is like a spaceship from tens of thousands of years ago. It’s clear that there was active art going on then, perhaps involving drawing and painting directly on the body. This was the first canvas: the body as a place of transformation where — through dance — the work of art, sculpture, was performed.

Human beings have found it necessary to remake the body for themselves in order to understand it — both as an object and as a place among other places. In the earliest signs of artistic activity, the question of authorship and whose body was represented by whom was collapsed by drawing on and from the body directly, both in ritualised body painting and the hand stencil. It is here that you first find the intuition that bodies can be inhabited empathically. In other words, the painted, decorated or costumed body is transformed and can take on the character of another life form, or even a mountain. This bodily transformation allows the mind of the viewer to dwell in that of another.

MG: The hand stencils made in many caves by prehistoric people look like freeze-frames from a dance: a crowd of remote ancestors waving to us across a gulf of time. Analysis of the hand silhouettes found in many prehistoric sites throughout the world — in South America and Indonesia as well as Europe — has revealed that a large majority of them are silhouettes of female hands. Did they belong to the artists themselves? For many centuries — indeed until modern times — there are very few records of women sculptors. So it’s worth holding on to the idea that quite possibly the earliest artists were women; and perhaps that continued to be the case for tens of thousands of years.

AG: When you visit the caves where prehistoric people made art, it’s difficult not to think that the first marks made there were the direct transference of the body to the wall — either as silhouettes or direct handprints. Pliny’s tale of the Corinthian maid tracing the silhouette of her boyfriend’s shadow on the wall, and thus initiating figurative art, not only contains a very fundamental idea about the dawn of drawing but also about the dawn of three-dimensional form. She first drew the outline and her father then used that as the basis for a portrait relief in clay.

MG: The first artists may have been female, as we’ve just seen, but many of the subjects definitely were. At numerous sites in Europe and as far as the Indus Valley, small figures have been found representing women with bodies as weightily substantial as one of Lucian Freud’s models, the benefits supervisor. Whoever made them had looked hard at a real woman’s body.

AG: Why is it the prehistoric figures somewhat erroneously known as Venuses still have such potency? These are tiny objects and seem to be connected with childbirth and reproduction. I’m really interested in the degree to which the fertility figure is often made out of the earth itself. The Venus of Lespugue is mammoth ivory and so is the Hohle Fels Venus, but the Venus of Dolni Vestonice is mud.

Shaping the World: Sculpture from Pre-History to Now by Antony Gormley and Martin Gayford, is published by Thames & Hudson.